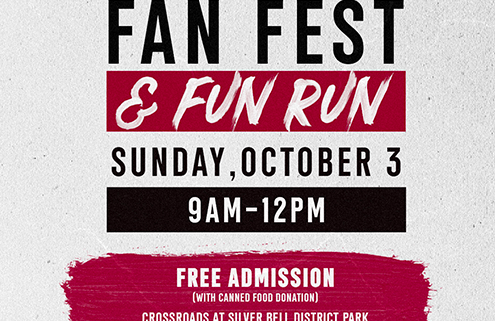 Tucson, Arizona – The Tucson Roadrunners, owned and operated by the Arizona Coyotes, will host Fan Fest on Sunday, October 3 at Crossroads at Silverbell District Park in Marana.

“We are excited to have Fan Fest once again and welcome our fans in anticipation of the 2021-22 season,” said Roadrunners President Bob Hoffman.  “Hockey is right around the corner, and we look forward to providing a fun safe environment for all sport fans in Tucson – Fan Fest is just the start of it!”

The event will begin with Dusty’s Fun Run/Walk at 9 a.m. with other activities going from 10 a.m. – 12 pm. Admission will be free and all attendees are encouraged to bring a  non-perishable food item for the Community Food Bank of Southern Arizona.

Food Trucks on site at the event will include: Fork N Fire, The Sweet Coqui, Kona Ice, The Coffee Cure, Cody Coyote Kettle Corn and others.

The Roadrunners open the regular season Friday, October 15 in Stockton with the Home Opening Weekend Saturday, October 23 at 7 p.m. and Sunday, October 24 at 4 p.m. against Texas.