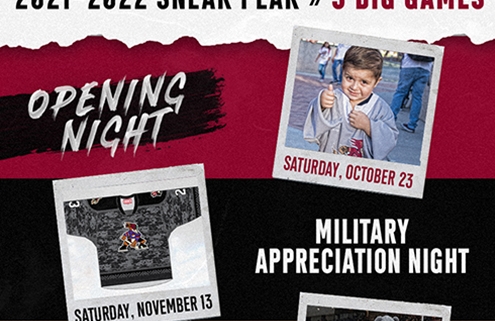 Tucson, Arizona – The Tucson Roadrunners, owned and operated by the Arizona Coyotes, today announced three big home dates for the 2021-2022 season with the complete schedule set to be unveiled in the coming weeks.

The three announced games feature three of the most anticipated events and annual traditions for the Roadrunners who are entering their sixth season of play in the American Hockey League.

The Roadrunners will offer a special Hat Trick Ticket Pack which includes a ticket to each of these three top tier games, along with a Roadrunners hat for $99 (offer available through August 15, 2021). That offer is available at TucsonRoadrunners.com/HatTrick

Roadrunners Season Ticket Memberships are on sale now and feature the best pricing for every game and exclusive benefits and events. Visit TucsonRoadrunners.com/MembersOnly for more information.

Half Season Memberships will go on sale at the team’s NHL Draft Party with ESPN Tucson (104.9 FM, 1490 AM) at Tucson Arena on Friday, July 23. The Draft Party will feature: a bottled water drive for the Community Food Bank of Southern Arizona, Select-A-Seat event, free snacks and soft drinks, raffle ticket for all attendees and more. Visit TucsonRoadrunners.com/DraftParty for more information.