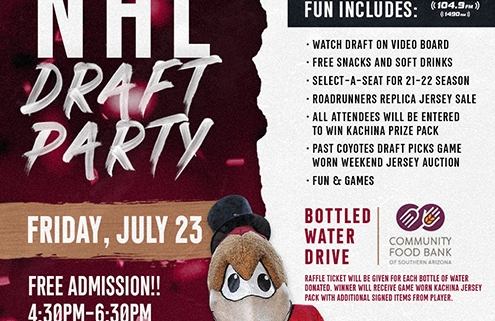 The event is free to the public as the team invites everyone to bring bottled water for the Community Food Bank of Southern Arizona. Fans will receive a raffle ticket for each bottle of water donated with the winner receiving a Game Worn Kachina Jersey, signed Kachina Stick and signed hat from that player as well. In addition, all fans at Fan Fest will receive a raffle ticket for a Kachina Prize Pack that includes: a team signed stick, signed Kachina puck and four best available seats for the first Kachina Saturday game of the year.

Snacks and soft drinks will be offered free of charge as the NHL Draft will be shown on the Tucson Arena Video Board. Spears and Ali from ESPN Tucson will also be broadcasting their show live from the Tucson Arena during the event. Fans will park in Lot A and enter the arena through the Roadrunners Season Ticket Member entrance on the NE side of the arena.

A 2021-2022 Select-A-Seat will also be taking place with seats marked that will be available for fans to purchase for Season Ticket Memberships. The event will also mark the first day the team will be selling Half Season Memberships for the upcoming season.

The team will also be holding a sale of the team’s replica jerseys at more than $50 off of the regular retail price.

Other fun and games will also be available during the party.