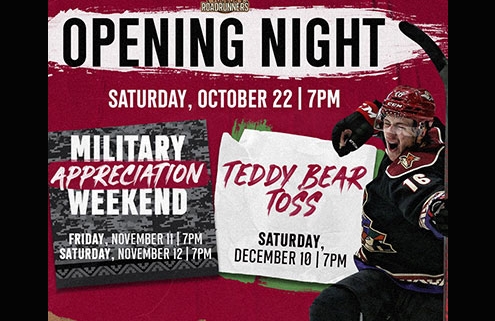 A complete schedule for the 2022-2023 season will be released in the coming weeks.

Fans can secure their seats for the 2022-2023 season with a Roadrunners Season Ticket Membership or by joining the Roadrunners Flex Club.

Season Ticket Memberships at TucsonRoadrunners.com/MembersOnly Include:

-Same Great Seats for Every Game

Flex Club Memberships at TucsonRoadrunners.com/Flex Include:

-Can Be Redeemed for any game in any quantity.

1-On-1 With Defenseman Cam Crotty
Scroll to top