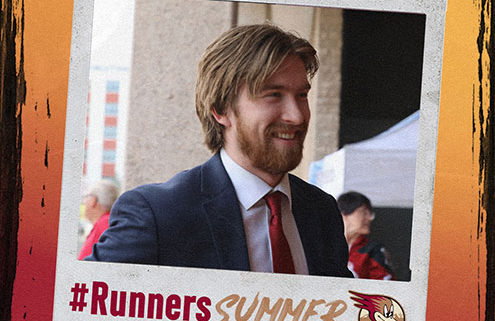 Roadrunners defenseman Cam Crotty joined “The Voice of the Roadrunners” Adrian Denny and TucsonRoadrunners.com’s Jimmy Peebles on last week’s edition of the Roadrunners Insider Podcast. The full episode, including how he got the nickname “Cream Cheese,” can be found on the iHeartRadio App or by listening below.

Listen to “Camping Out: With Cam Crotty” on Spreaker.

Q: It’s already been two months since the season ended and we were last together. What have you been up to, where was the first stop in the offseason?

A: The time really has flown by. At the end of the season, I spent some time in Tucson for about a week to wrap some things up. Then I went to the East Coast: Connecticut, Boston, to see some old friends and spend time with my girlfriend. I’ve been home in Canada since around May 20th, so it’s been good.

Q: During the offseason, have you been in contact with any of the coaches, staff, or your teammates?

A: From this year, I saw Doyle [Somerby] when I was on the East Coast, but that was before I came back to Ottawa. Other than that, I haven’t seen anybody, but I’ve been keeping in touch with a bunch of the guys and the coaches. I’ll be going back to Arizona in a couple of days and see the guys that are there. There aren’t too many guys that are close to me out here.

Q: You were one of two players this year that appeared in all 68 of our games. What was it like going through the entire season without missing a game?

A: It was awesome, it was a blessing. Sometimes when you get into the dog days of the season it’s a little grueling at times, but I’m so happy I was able to play as much as I did. It’s the most fun game in the world to play, so being able to do that for every game is awesome. I feel like that’s the goal for everybody each year. Obviously, injuries are a part of the sport, and you have to hope that doesn’t happen. When you can play every game like that it’s awesome for development and for the enjoyment of the game. I was really happy I was able to do that this year.

Q: After all of the ups and downs of the season, we ended it on a high note with those two wins over San Diego. It was only two games, but do you think it was symbolic of what’s to come with our group?

A: For sure. Like I said, when you get into the dog days of the season, ups and downs happen, but it’s always about setting the tone. For the guys coming back next year that were a part of this group, we know what we have, and we know what we can do. We showed it at times this year when we played really good hockey and beat some good teams. Little things like taking a series at the end of the year is huge for the guys. We have to start the 2022-2023 season off like that, get rolling and set the tone for the rest of the year.

Q: You got your first two call-ups last season, first to the Taxi Squad over Christmas, and then on that last road trip of year in April. Tell us about those, a nice culmination of playing so well in your first two seasons.

A: That was cool, it was a bit of a crazy day for sure. One of the players got injured and they weren’t sure if he was going to play, so they gave me a call and I was happy to get that call and go up there. When I got there, I went to the rink and got the whole experience.  It was unfortunate I didn’t get to lace them up, but it was a really cool experience. And getting to see the guys up there that I had played with earlier in the year [in Tucson] was really cool. It was a little taste and for me, it made me hungry to get back there.

Q: This is a great organization to be a part of right now, we saw 16 guys called up from the Roadrunners to the Coyotes. Depending on need, that next call-up could be anyone on our team. Going into camp last year, guys like Dysin Mayo were close to making the NHL team, then got that call a week later.

A: There’s tons of opportunity [here] and it’s up to every guy to seize that. Seeing a guy like Dysin Mayo, I can’t tell you how happy that made me and so many guys on the team. He’s a guy that’s battled and grinded for so many years, then finally gets a chance and proves his stuff. He’s super reliable and such a character guy. I think that’s motivation for everyone else trying to do the same thing.

Q: We saw players going up and down throughout the season, but I think we were able to keep our identity the same through it all.

A: We talked about it a lot in our exit meetings, but it was such a crazy year. There were a lot of injuries for both Tucson and the Coyotes. But with our core and our culture and the characters in the room, it didn’t matter. It didn’t matter if there was one, or two, or five guys going up, we were going to battle every night. It really speaks to the leaders and the coaches and everybody who kept us centered. We had guys getting called up to us and going up to the Yotes, but we just got used to it as the year went on.

Q: You were drafted by the Coyotes in 2017, tell us about draft day and the quick travel to Arizona for prospect and development camp?

A: It feels like a long time ago. For me, I was playing Junior-A in Canada. I knew I had a pretty good chance of getting drafted, but I didn’t know where. I was thrilled once Arizona picked me. It was a quick turnaround and it’s funny, I didn’t know that camp was going to be the next day, so I didn’t have my gear or anything with me. *laughs* I didn’t have a single item of my own hockey gear. But it was great, that was my first time meeting our [Tucson] coaches. I’ve been to four or five development camps since then, and they’re always great experiences.

Q: Was there anyone at your first development camp that you met for the first time, that’s become a big part of your Coyotes family since?

Q: Our defense was changing and evolving as the season went on, but you were one of the biggest constants. What are some of the benefits of being paired with different guys as the season goes on?

A: It’s good to have chemistry with one guy that you’re used to playing with, but it’s also of huge value to a team to be able to mix it up. If we’re in need of a goal, then John Slaney is comfortable mixing and matching to try and push for a goal. Or if we have a lead and we need to shut it down, he’ll mix it up. It’s good to be familiar with a bunch of guys and it’s the same thing with the forwards, those guys mix and match all the time. I loved playing with everybody this year on the back end.