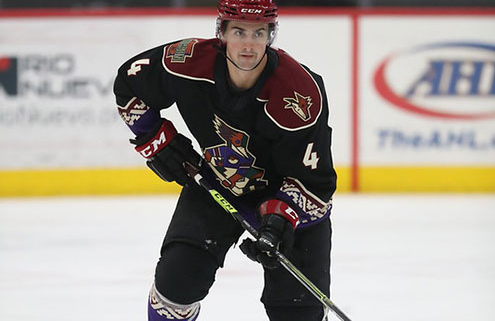 During the current offseason signing period, the Arizona Coyotes have inked the below Roadrunners from past seasons along with other previous AHL rivals/opponents. Leading into Training Camp, we will update this article with the latest signings of recent Roadrunners and other players we’ve seen throughout the AHL who have signed with the Coyotes.

Jean-Sebastien Dea: The Coyotes announced the signing of forward Jean-Sebastien Dea to a two-year, two-way contract. The 28-year-old played in 70 games with the AHL’s Laval Rocket last season, leading the team in goals with 26 and ranking second on the team in points with 52. Dea also tallied eight points (4g 4a) in 15 Calder Cup Playoff games. In 450 career AHL regular season games, Dea has never faced the Roadrunners. He has appeared in 33 career National Hockey League games with the Pittsburgh Penguins, New Jersey Devils and Buffalo Sabres.

Bokondji Imama: The Coyotes announced the signing of forward Bokondji Imama. The 25-year-old returns to the desert after appearing in 54 games with Tucson and four games with Arizona last season. Imama led the AHL in penalty minutes with 178, while also tallying 12 points (5g 7a) and a team-leading 11 fights as a Roadrunner. He made his National Hockey League debut on April 22, 2022 against the Washington Capitals, and scored his first NHL goal the next night against the St. Louis Blues. Imama and the Roadrunners collaborated to design a t-shirt that was sold in the Tucson Arena during games and online with all proceeds going to the Hockey Diversity Alliance, raising thousands of dollars and selling hundreds of shirts.

Laurent Dauphin: The Coyotes announced the signing of forward Laurent Dauphin to a one-year, two-way deal. A second-round draft pick by the Coyotes in 2013, Dauphin appeared in 89 games with the Roadrunners between 2016 and 2019. The 27-year-old returns to the desert after recording 12 points (4g 8a) in 38 games with the Montreal Canadiens (NHL) and 16 points (11g 5a) in 18 games with the Laval Rocket (AHL) last season. Prior to the 2021-2022 campaign, Dauphin had played in 35 career NHL games, all with the Arizona Coyotes.

Jon Gillies: The Coyotes announced the signing of goaltender Jon Gillies to a one-year, two-way contract. The 28-year-old appeared in a career-high 20 NHL games last season with the St. Louis Blues and New Jersey Devils. Drafted by the Calgary Flames in 2012, Gillies was a member of the Stockton Heat from 2015 to 2020. He was in net against the Roadrunners for 20 games during his time in Stockton, including Tucson’s first-ever home game on October 28, 2016.

Cam Dineen: The Coyotes announced the signing of defenseman Cam Dineen to a one-year, two-way deal. The 24-year-old remains in the desert after spending the last four seasons in the Coyotes organization. Dineen has amassed 157 career AHL games (all with Tucson) and set career highs for assists (16) and points (19) in 21 games with the Roadrunners last year. Drafted by Arizona in the Third Round (#68) in the 2016 NHL Entry Draft, Dineen made his National Hockey League debut with the Coyotes on November 5, 2021. In all, he made 34 NHL outings with Arizona and recorded seven assists.

Christian Fischer: The Coyotes announced the signing of forward Christian Fischer to a one-year NHL contract. Fischer was a member of the 2016-2017 Inaugural Roadrunners roster, and is joined by Dysin Mayo, Kyle Capobianco and Laurent Dauphin as the only players in the Coyotes organization from Tucson’s first season. In his only season as a Roadrunner, Fischer recorded 47 points (20g 27a) in 57 games to lead the team in goals as a rookie.

Two-Way Contract: A two-way contract is a contract that stipulates that an athlete’s salary is dependent upon the league in which the athlete is assigned to play (NHL or AHL).