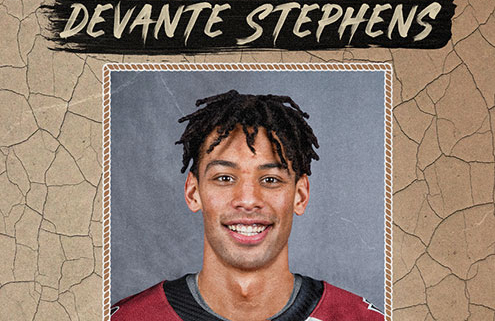 Tucson, Arizona – The Tucson Roadrunners, the American Hockey League affiliate of the Arizona Coyotes, announced today the signing of defenseman Devante Stephens to a one-year AHL contract for the 2022-2023 season.

The six-foot-three British Columbia native spent the 2021-2022 season with the AHL’s Abbotsford Canucks where he appeared in 59 of 68 regular season games and totaled three goals and 12 assists for 15 points and a plus-15; that ranked third on the team and second among defensemen.

“Devante provides experience and defensive presence while continuing to improve as a pro. He is a welcome addition to our blue line.”

The 2015 Draft Pick of Buffalo has appeared in 130 total AHL games with Rochester, Syracuse and Abbotsford and tallied eight goals and 24 assists for 32 points and a plus-18. He led Syracuse defenseman with a plus-14 during the 2020-2021 season.

In three years of Junior Hockey with Kelowna of the WHL, the Rockets had a regular season record of 146-55-14 as Stephens appeared in 52 playoff games and advanced to the 2015 Memorial Cup.