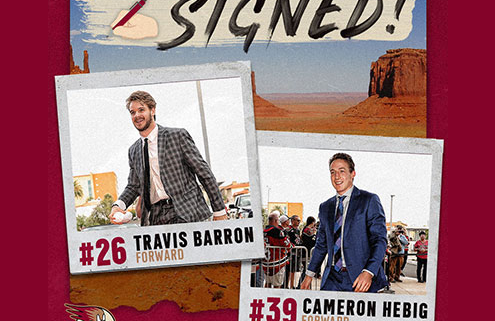 Tucson, Arizona – The Tucson Roadrunners, the American Hockey League affiliate of the Arizona Coyotes, announced today the signing of forwards Travis Barron and Cameron Hebig to one-year AHL contracts for the 2022-2023 season.

Hebig, 25, enters his third season in Tucson after appearing in all 68 games with the Roadrunners in 2021-2022 where he put up a career-high 13 goals while also tallying 12 assists for 25 points. The Roadrunners were 9-2 when Hebig scored last season. He started his career by playing two seasons against the Roadrunners in the Pacific Division with the Bakersfield Condors after four seasons in the WHL with Saskatoon and Regina. He’s second on the Roadrunners with 97 games played over the past two seasons and ranks sixth on the team in scoring since joining Tucson at the beginning of the 2020-2021 season.

“Cameron’s energy and puck pursuit was evident every game. His production was consistent and we look for that to take a step forward this coming season.”

Barron, 24, returns to the Roadrunners after posting career-highs with 12 goals and 13 assists for 25 points playing in 64 of the team’s 68 games in 2021-2022. 64 games played was third on the team behind only Hebig and Cameron Crotty who both appeared in all 68 games. He was originally drafted by the Colorado Avalanche in 2016 and played against Tucson for the first three seasons of his pro career with the Colorado Eagles. He was Captain for the Ottawa 67’s his final season as an amateur in 2017-2018 where he was coached by current Arizona Coyotes Head Coach Andre Tourigny.

“Travis Barron made some very good strides and has proven versatility and competitiveness. We look forward to seeing the improvements that he made this offseason and look for him to contribute on a nightly basis.”

The Roadrunners open the season Friday, October 14 in Henderson. The team’s home opening weekend at Tucson Arena will be Saturday, October 22 at 7 p.m. and Sunday, October 23 at 4 p.m. against Bakersfield.