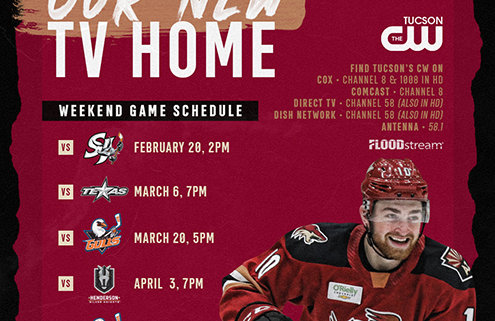 “We are excited to team with KWBA, The CW Tucson to provide Southern Arizona with a schedule to watch Roadrunners games on television during our fifth season,” said Roadrunners President Bob Hoffman. “The team at KWBA shares our vision of providing family entertainment to our community and it is great for both our fans and corporate partners to add this additional platform.”

“Now more than ever with the worldwide pandemic, local television is playing a vital role providing Southern Arizona information and entertainment,” said Tregg White, Vice President and General Manager of KGUN and KWBA. “We are excited to partner with the Roadrunners to televise several homes games this season.”

“Voice of the Roadrunners” Adrian Denny will be joined by Arizona Coyotes Manager, Digital Media/Content Alex Kinkopf, who will serve as the team’s primary color commentator. The telecast will be simulcast on The Home of Roadrunners Radio Fox Sports 1450 AM as well. FLOODstream will produce the broadcast.

About the Announcers
Adrian Denny enters his third season as the “Voice of the Roadrunners” and his 16th season providing play-by-play in professional hockey. This marks his seventh season broadcasting games on television and also doubling as the Executive Producer.

Alex Kinkopf is in his second year covering the Coyotes for ArizonaCoyotes.com as the team’s Manager, Digital Media/Content. He previously spent three seasons in Tucson as Manager of Digital Operations where he also contributed to the Roadrunners radio broadcasts and co-hosted the Roadrunners Insider Podcast on the iHeart Radio app.