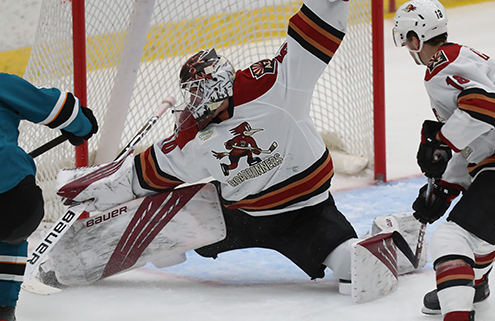 Where We Stand
The Roadrunners are currently 4-0-0-0, and one of three undefeated teams in the Pacific Division, along with the Henderson Silver Knights and San Diego Gulls. They are tied for second in the division in goals scored with 16. The Roadrunners have scored 14 goals in their last three games, their most in a three-game span since December 31-January 4 , 2020 when they tallied 16 goals.

Leader of the Flock
Roadrunners forward Michael Bunting leads the Roadrunners in goals and points after the first week of the season. Bunting posted two goals, including two game-winners, along with three assists. Bunting is tied for the AHL lead in both goals and points in his fifth year in Southern Arizona. Bunting was named the CCM/AHL Player of the Week for the previous week.

Leader of the League
As of the Roadrunners’ last game (Sunday, February 14), Roadrunners goaltender Ivan Prosvetov leads the entire AHL in minutes and wins. Ivan has played a key role in all four of the Roadrunners’ victories this season, with 2.73 goals allowed per game, and a .920 save percentage. Prosvetov finished last year with 14 wins and has emerged as a focal point of Tucson’s roster this season.

Special Teams Skill
The Roadrunners have scored three power-play goals through four games, all of which have come from Michael Bunting. Tucson is 11 for 13 on the penalty-kill with a shorthanded goal by Nate Sucese, his first pro goal on Friday. Tucson has outscored the opposition 5-2 in non five-on-five play.

First Fan Details
Working with Pima County, the City of Tucson and Tucson Arena; the Roadrunners have determined that the first three official home games will be closed to the public as all parties monitor the current public health situation. “Planning remains ongoing and fluid, as it has for the last several months, for us to welcome our fans back into Tucson Arena,” said Roadrunners President Bob Hoffman. “When that day comes, we have multiple measures in place for everyone to have a safe and enjoyable time cheering on the Roadrunners. We are optimistic that will happen this season as we continue to move forward together.”

Around the Pacific Division
After a little over a week of the 2021 season, the AHL Pacific Division has a clear divide in the standings. The three teams at the top are undefeated, while the other four teams have a combined .167 winning percentage through 15 games played. The San Diego Gulls have the most wins at five, while Tucson and Henderson each have four. The San Jose Barracuda are the only other team with a win. Colorado, Ontario, and Bakersfield are all winless heading into week two.

Did You Know?
Through the first four games of the season, thirteen different Roadrunners skaters have recorded a point, including seven newcomers. Tucson’s two returning AHL All-Stars from last year, Michael Bunting and Lane Pederson lead the team with seven and six points, respectively.