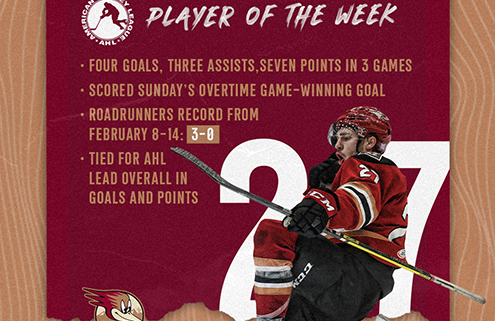 SPRINGFIELD, Mass. … The American Hockey League announced today that Tucson Roadrunners forward Michael Bunting has been selected as the CCM/AHL Player of the Week for the period ending February 14, 2021.

Bunting recorded four goals (including two game-winning tallies) and three assists for seven points in three games as the Roadrunners won all three games played this past week to improve to 4-0 on the season.

Bunting scored the decisive goal and added two assists last Monday as Tucson defeated San Jose, 5-3. On Friday, he tallied a pair of power-play goals and assisted on the game-winner as the Roadrunners beat Ontario, 5-4. And on Sunday, Bunting scored in overtime to give Tucson a 4-3 win over the Reign, their fourth consecutive victory to begin 2020-21.

A sixth-year pro, the 25-year-old Bunting is tied for the AHL lead in both goals (4) and points (7) this season.

Bunting, who has been in Tucson for all five seasons since the team arrived in 2016, is the team’s all-time leading scorer with 71 goals and 97 assists for 168 points in 248 career games. He was an AHL All-Star in 2019.  The fourth-round pick by Arizona in the 2014 NHL Draft has also tallied one goal in five NHL games with the Coyotes.

In recognition of being named the CCM/AHL Player of the Week, Bunting will receive an etched crystal award from CCM.

Tucson Roadrunners Road Ahead: Week of February 15, 2021
Scroll to top