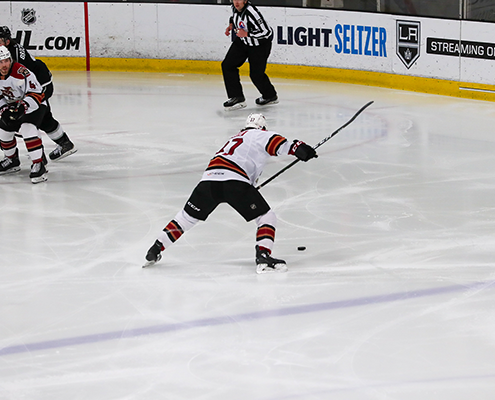 ROADRUNNERS WRAP UP ROAD SERIES WITH REIGN, BUNTING BURIES THE GAME-WINNER IN OVERTIME

El Segundo, California – The Tucson Roadrunners improved to 4-0 for the first time in team history Sunday afternoon, defeating the Ontario 4-3 in overtime Sunday afternoon. Michael Bunting had the game-winning-goal 32 seconds into the extra period.

After Tucson jumped out to a 2-0 lead through the first two periods, thanks to a pair of goals by Michael Carcone, the Roadrunners and Reign went back-and-forth scoring in the third, culminating in a 3-3 tie at the end of regulation. Overtime wouldn’t last long, as Michael Bunting scored his team-leading fourth goal in as many games to give the Roadrunners the win. Similar to Cam Dineen scoring a minute and seventeen seconds into the overtime period a week ago, Michael Bunting only needed 32 seconds to send the Tucson Roadrunners back home to Southern Arizona with a 4-0 record. Roadrunners goaltender Ivan Prosvetov started his fourth consecutive game and picked up his fourth consecutive win in the process. Ivan stopped 30 of 33 shots faced, including a stellar save on the breakaway in the second period. He now leads the AHL in minutes, saves and wins.

The Roadrunners return home and will play their next game Friday, February 19th at the Tucson Convention Center against the San Jose Barracuda, at 5 p.m. You can listen to the game in Tucson on FOX 1450 AM and on the iHeart Radio app or watch the game on AHL TV.

“I like our coverage and the way we’re breaking pucks out, but we need to pay special attention to our shift length and line changes. Many of our chances against are coming off the rush. I’m happy the guys are finding ways and sticking with it for 60 minutes and then some.”

Roadrunners head coach Steve Potvin after the game on his team’s performance through the first four games of the 2021 season.

DON’T OVERLOOK IT
FOLLOWING THE LEAD – The Tucson Roadrunners have only trailed for 65 seconds of game time through four games in the 2021 season, all of which came in last Monday’s 5-3 win over the San Jose Barracuda. Tucson has scored the last goal in all four of their games, including the two overtime winners.

Watch Michael Bunting secure the overtime win for the Roadrunners on Sunday as he finds the back of the net 32 seconds into overtime. Bunting leads the team in goals this season with four, three of which have come on the power-play. This goal saw Lane Pederson earn his fourth assist, tied with Jan Jenik and Brayden Burke for most on the team through four games.

Michael Carcone skates down the line after scoring his first of two goals in Sunday’s 4-3 overtime win over the Ontario Reign. Carcone spent last season with the Belleville Senators, notching 13 goals and 14 assists in 59 games in the AHL North Division.