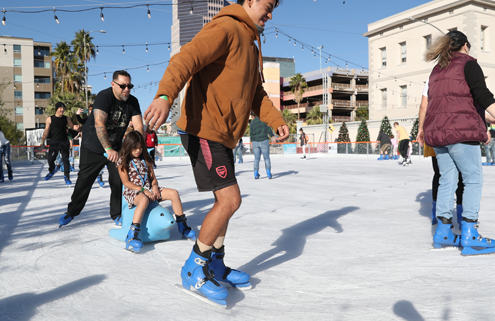 Tucson, Arizona – The Tucson Roadrunners, AHL affiliate of the Arizona Coyotes today announced several events to celebrate the holidays with the Tucson community.

On Tuesday, December 6, select players will join fans at Tucson Holiday Ice on Church Avenue from 6 p.m. – 7 p.m. to skate with patrons. Fans who bring a non-perishable food item will receive a free game ticket to either the team’s December 13 or 14 games against Coachella Valley. Tucson Holiday Ice, in partnership with Pima Pain Center, the City of Tucson, Rio Nuevo and the Tucson Convention Center is open daily through January 8 with 90-Minute Sessions for Southern Arizona to enjoy. Fans will soon be able to reserve their spots in advance by visiting TucsonRoadrunners.com and clicking “Tucson Holiday Ice” as the timeslot will sellout in advance.

Thursday, December 8, the Roadrunners are teaming with the Boys & Girls Clubs of Tucson for a hockey workshop at the William J Dawson Memorial DEK Hockey Rink on 3151 East Grant Road. 100 local students will take part in the afternoon session that begins at 4 p.m. as Roadrunners players will share hockey instruction, sign autograph and distribute holiday gifts.

Friday, December 9, the Roadrunners are inviting all fans to bring toys to the 7 p.m. game against Ontario that Dusty will deliver to Diamond Children’s Medical Center on Monday, December 12. In addition, the first 1,000 fans will receive Roadrunners holiday ornaments courtesy of Tucson International Airport. Fans are also stay tuned to stay for the postgame double feature showing of Elf.

Saturday, December 10, Tucson Electric Power presents the team’s annual Teddy Bear Toss where fans are invited to throw stuffed animals onto the ice for local children during the holidays. The Roadrunners have partnered with the Assistance League of Tucson for this game. They will receive the proceeds from the 50/50 raffle that evening and will distribute a limited number of specially designed Teddy Bears for fans to use during the toss, visit their table during the game for more information.

Assistance League of Tucson is a non-profit organization that is managed and staffed by volunteers who are dedicated to working to improve the lives of those in need in the Tucson area. The stuffed toys collected will be donated to Aviva Children’s Services, a wholly owned subsidiary of Easterseals Blake Foundation.

Later this week, the team will announce several offers for fans to take advantage of in their holiday shopping.

Followon TwitterSubscribeto RSS Feed
Tucson Roadrunners Road Ahead: Back With The Barracuda