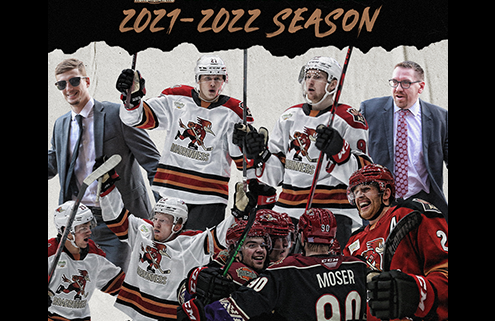 The Tucson Roadrunners capped off their sixth season in Southern Arizona by drawing 121,174 fans in a year that saw a franchise record eight skaters make their NHL debuts with the Arizona Coyotes. A total of 15 players appeared in games for both the Roadrunners and Coyotes to reach 46 players to play for both teams all-time. Tucson has now drawn a total of 676,476 fans over their six seasons in the desert and counting.

Not only did Tucson win their Opening Night and Home Opener games by way of back-to-back shutouts from Ivan Prosvetov, the Roadrunners also won both their return from the Gem Show and regular season finales by one goal in thrilling fashion. Tucson began their season by facing off with the eventual Pacific Division Champions, the Stockton Heat, on the road Friday, October 15. Both teams were held scoreless through regulation, before Vlad Kolyachonok recorded the first goal of the season for Tucson and his first AHL goal to give the Roadrunners the win and a 1-0 record to start the season. After starting the season on the road in Stockton, the Roadrunners returned home to the Tucson Arena for their Home Opener on Saturday, October 23 against the Texas Stars. The game marked the first contest with full capacity since the 2019-2020 season, as 5,097 fans saw the Roadrunners improve to 2-1 with a 4-0 victory. Forward Ben McCartney notched his first of two hat tricks on the season in the win. When the Roadrunners returned home from their Gem Show Road Trip in February, they were greeted to the largest crowd of the season on Youth Jersey Giveaway Night February 19. Tucson didn’t disappoint the 5,502 fans in attendance, as their 4-3 comeback win saw the go-ahead goal scored by Mike Carcone in the final 16 seconds of regulation. With 5,410 Roadrunners Faithful in attendance, Tucson wrapped up the season with one final thriller as they won a shootout over the San Diego Gulls by a score of 3-2, closing out the year on their home ice Friday, April 29.

Largest Crowds Of The Season

Doing Our Part Off The Ice

The Roadrunners organization and players were active in the community during the season, raising money for various local organizations and initiatives throughout the hockey world. Tucson forward Boko Imama and the Roadrunners partnered with the Hockey Diversity Alliance to create and sell “Enough is Enough” T-shirts, beginning in February and lasting through the end of the season. Imama and teammate Stephen Harper also had game-worn jerseys auctioned off for Black History Month. In all, the Roadrunners raised $5,000 for Hockey Diversity Alliance to promote inclusion and eliminate racism in the game of hockey. The Roadrunners also raised nearly $25,000 at the end of February by auctioning off their special hot-pink Roadrunners Fight Cancer Jerseys, with all proceeds going to Banner Health University of Arizona Cancer Center. Earlier in the season, Tucson auctioned off their game-worn Military Kachina themed jerseys, with over $30,000 raised going to Vet Tix as part of Military Appreciation Night. Finally, the Roadrunners El Lazo de Tucson jerseys were available by way of auction, raffle, or buy now options at the end of March. The proceeds of nearly $15,000 went to Boys & Girls Clubs of Tucson, as well as Mariachi Los Diablitos from Sunnyside High School, who regularly performed at Roadrunners games during the season.

Theme Nights For All

The Roadrunners held a variety of theme nights this season to celebrate and salute all types of Tucson hockey fans. Opening weekend at the Tucson Arena featured Health Care Hero Night followed by Teacher Appreciation Day, as the Roadrunners returned to games at full capacity. The next weekend, the Roadrunners donned their El Lazo de Tucson alternate identity to celebrate Dia de los Muertos. Tucson would return to the El Lazo de Tucson uniforms two more times during the season. November 13 marked Military Appreciation Night as the team wore Military Kachina jerseys and auctioned them off after the game. December 10 was Marvel Night at the TCC, followed by the Roadrunners Teddy Bear Toss game the next night. In that game, Ryan McGregor buried a wrap-around goal with 12 seconds remaining in the second period to send the teddy bears soaring onto the ice. The thousands of stuffed animals were collected and donated to Aviva Children’s Services. Tucson wore their special hot-pink jerseys February 26 and 27 as part of Roadrunners Fight Cancer Weekend. The Roadrunners next returned home on Wednesday, March 16, as they gave away green St. Patrick’s Day Beads for Go Green Night. The series continued with Hockey is for Everyone Night on Saturday, March 19. Saturday, April 2 was Autism/Sensory night at the Tucson Arena with a modified game presentation for all fans. Finally, the Roadrunners wrapped up the season with Fan Appreciation Weekend April 15 and 16 and a Fan Appreciation Encore April 28 and 29.

The Roadrunners wore seven different uniforms throughout the 2021-2022 season, including their traditional reds and whites, as well as the fan-favorite Kachina alternates. Also in the mix were their El Lazo de Tucson uniforms, Military Appreciation jerseys, Roadrunners Fight Cancer uniforms, and special Fifth Anniversary uniforms.

A Deluge Of Debuts

Eight different Tucson skaters made their NHL debuts this season with the Arizona Coyotes. Six of the eight appeared in at least 20 games with Arizona, while four played in at least 30 contests:

In addition, seven other players appeared in games for both the Roadrunners and Coyotes this season:

Under Friday Night Lights In Tucson

Some of the Roadrunners best performances this season came on Friday nights on their home ice. In 10 Friday games at the Tucson Arena, the Roadrunners came away with a 7-2-1-0 record. Among these matchups were three shootout wins over the Stockton Heat (December 10), San Jose Barracuda (March 18), and San Diego Gulls (April 29). Each of Tucson’s final six Friday-night home games were decided by one goal, with four of the six going past regulation.

Hats Off To These Performances

The Roadrunners had six hat tricks scored this season by four different players, setting a new franchise record for most hat tricks in a season:

Rookie forward Matias Maccelli had a memorable first season in the desert with Tucson, as the 21-year-old led the team in assists (43) and points (57). His 57 points were the most in a single season by a Roadrunner since their Inaugural 2016-2017 season. After tallying 19 points (4g 15a) in the span of 10 games, the February 2022 AHL Rookie of the Month was recalled to the Arizona Coyotes and made his NHL debut on March 3 against the Colorado Avalanche and scored his first NHL goal the next game on March 5 against the Ottawa Senators. Maccelli appeared in 23 games this season with the Coyotes and posted six points (1g 5a) in his first taste of NHL action. Macelli was drafted by the Arizona Coyotes in the fourth round (#98 overall) in the 2019 NHL Draft.

Forward Mike Carcone made Roadrunners history on Friday, March 18, when he scored his 24th goal of the season to set a new franchise record for goals in a season. Carcone became the first-ever Roadrunner to lead the team in goals for back-to-back seasons after scoring 15 in the 2020-2021 campaign, his first season in the desert. The 25-year-old was recalled to the Arizona Coyotes one game later to finish the season. In 48 games with Tucson this season, Carcone recorded 41 points (24g 17a) and tallied a point in each of his last five games before joining the Coyotes.

Goaltender Ivan Prosvetov took on a larger workload this year than in any season before, setting a Roadrunners franchise record for minutes in a season with 2474:10, beating the previous record by over 230 minutes. The 23-year-old finished sixth in the AHL overall for minutes and seventh in saves with 1112, both career-highs. Prosvetov opened the season with back-to-back shutouts and reached 15 wins for the first time in his career. In addition, he started three games in the NHL for the Arizona Coyotes this season, including a 44-save performance which went to a shootout against the Colorado Avalanche. Prosvetov returned to Tucson for the end of the season and recorded an 18-save shootout victory in the final game of the year.

The Roadrunners were record-setting on the man-advantage this season, as they set a franchise record for best power-play percentage at 20.5 percent. The mark ranked seventh in the 31-team American Hockey League, and their 57 power-play goals were tied for the most in team history. Their 23.1 power-play percentage on the road would have ranked in the top-four of the league in four of the last five seasons and best in the league in two of the last five, including when Tucson led the league at 22.5 percent in 2017-2018.

The 2021-2022 season marked the second year to have Roadrunners games televised live on The CW Tucson. The Roadrunners had six games televised in Southern Arizona on The CW Tucson this season, including their first-ever televised road game in Stockton on Saturday, January 15. In their final TV game on Saturday, April 16, forward Ben McCartney recorded his second hat trick of the year in front of the fifth-largest crowd on the season at the Tucson Arena.

The final edition of Roadrunners Happy Hour for the season will be on FOX Sports 1450AM and the iHeartRadio App on Tuesday, May 3 at 5:00 p.m. MST, as Adrian Denny and Brett Fera recap the 2021-2022 season. The fun will continue all summer long on the iHeartRadio App as the Tucson Roadrunners Insider Podcast will be available every week, where Adrian Denny and Jimmy Peebles talk most things Tucson Roadrunners with a weekly special guest. (Photo Credits: Kate Dibildox/Chris Hook)

RRTV In The Community: Toys for Banner Children
Scroll to top