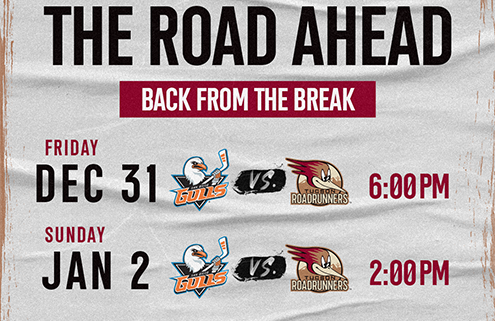 Tucson Roadrunners Road Ahead: Back From The Break

The AHL has announced that due to league COVID-19 protocols affecting the San Diego Gulls, the following games have been postponed:

Make-up dates have yet to be determined.

To celebrate five years in the desert and the start of a new year, the Roadrunners will be wearing their special 5th Anniversary Jerseys when they host the Colorado on Saturday, January 8. Fans can get their hands on game-worn and game-made 5th Anniversary jerseys by way of raffle, auction, or buy now options that can be found HERE through January 8.

Jenik On The Move

The Arizona Coyotes announced Monday morning that the team had recalled forward Jan Jenik from Tucson. Jenik has already appeared in two games with the Coyotes this season as well as 14 games with the Roadrunners. The 21-year-old has posted 11 points (4g 7a) with a +1 rating in those AHL contests. Jenik made his NHL debut for the Coyotes last season and scored a goal in each of his first two games at the NHL level, after being drafted in the third round (65th overall) in the 2018 NHL Draft.

Tuesday morning, the Coyotes announced that they have also recalled forward Matias Maccelli from Tucson. The 21-year-old has recorded 7-14-21 in 21 games with the Roadrunners this season. He currently leads Tucson in points, goals and assists. The 5-foot-11, 176-pound forward ranks tied for fifth in assists and fourth in points among AHL rookies. The forward was named AHL Rookie of the Month for November after posting 14 points (6-8-14) across Tucson’s eight games that month. He was drafted by the Coyotes in the fourth round (98thoverall) in the 2019 NHL Entry Draft.

Making Up The Taxi Squad

2021 was a big year for Roadrunners goaltender Ivan Prosvetov, as he opened both the 2021 and 2021-2022 seasons for the Roadrunners, allowing only one total goal in the pair of season-opener wins. The 22-year-old began his 2021-2022 campaign with two-straight shutouts, after he made his NHL debut back on March 31 with the Arizona Coyotes. Prosvetov set a new career-high in saves on May 1 with 47 shots turned aside in a 9-2 win, then matched that amount in a 5-4 shootout win over the Stockton Heat on December 10.

Leading the way with most goals by a Roadrunner during the 2021 calendar year is forward Mike Carcone with 20. He is also Tucson’s 2021 leader in points (36) games played (56) and power-play goals (7). Carcone signed a two-year, two-way contract with the Arizona Coyotes this past offseason, after joining the Roadrunners roster on loan last season from the Nashville Predators.

The Roadrunners had eight different players make their NHL debuts with the Arizona Coyotes over the course of 2021, including 17 players to spend time on both the Coyotes and Roadrunners rosters. Dysin Mayo, Cam Dineen, Ben McCartney, and JJ Moser are among those to make their NHL debuts so far this season, while Jan Jenik and Victor Soderstrom have suited up for both Tucson and Arizona this year after making their debuts last season.

Back On CW Tucson