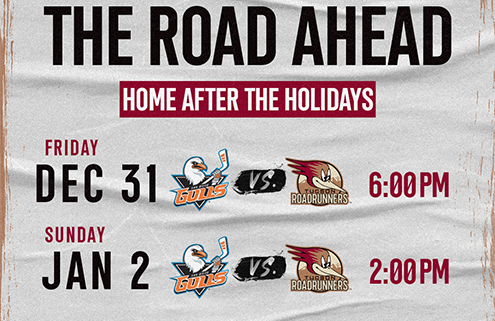 Tucson Roadrunners Road Ahead: Home After The Holidays

The American Hockey League announced that due to Covid-related travel concerns, this week’s games between the Tucson Roadrunners and Abbotsford Canucks scheduled for Wednesday, Dec. 22 and Thursday, Dec. 23 in Abbotsford, B.C., will be rescheduled. New dates have yet to be determined.

The Roadrunners will return home after the holiday break to begin their longest home stand of the season, a six-game stretch beginning with a New Year’s Eve matchup against the San Diego Gulls. Tucson will host the Gulls, the Stockton Heat, and the Colorado Eagles for a pair of games each at the Tucson Arena between New Year’s Eve and January 9.

On The First Day Of #MeepMeepXmas…

Tucson will be wearing their special 5th Anniversary Jerseys when they host the San Diego Gulls on New Year’s Eve. Fans can get their hands on game-worn and game-made 5th Anniversary jerseys by way of raffle, auction, or buy now options that can be found HERE.

New Year’s Packs To Pounce On

In one of the best deals of the season, fans can enjoy a pair of discounted Center Ice Tickets for the Roadrunners New Year’s Eve game against the San Diego Gulls, along with a $25 gift card from Ten55 Brewing Company. The $120 value offer can be purchased for only $49 HERE.

Save The Date With Dillinger

After the Arizona Coyotes secured a 6-5 overtime victory in Anaheim against the Ducks Friday night, the Roadrunners got an overtime win of their own the next day just down the road in Ontario. The Reign jumped out to an early 1-0 lead, but Tucson answered back with the next two goals scored in the contest. The game headed to overtime with the score tied at 3-3, where Vlad Kolyachonok netted his second overtime game-winning goal of the season. With the win, the Roadrunners are now 6-3-1 in their last ten games, tied for second-best in the AHL Pacific Division during that span.

A handful of Roadrunners players moved around Southern California last weekend, beginning with the recall of forwards Mike Carcone and Blake Speers to the Arizona Coyotes Friday afternoon. Speers appeared in Arizona’s 6-5 overtime win over the Anaheim Ducks, tallying over seven minutes of ice time. Carcone and Speers were then sent back to the Roadrunners after the game, and both appeared in Tucson’s 4-3 overtime win in Ontario the next night. Speers was then brought back up to the Coyotes along with forward Jan Jenik, where they are currently on Arizona’s roster.

Leading the Roadrunners in Plus-Minus with a +4 rating over the last five games is defenseman Cole Hults. The 23-year-old defenseman has three points during that span, including his first goal of the season on Saturday against his former team, the Ontario Reign. His goal briefly put the Roadrunners on top 3-2 in the third period of their eventual 4-3 overtime victory over the Reign.

The Roadrunners are one of the best in the AHL when it comes to winning close games. Tucson has a 5-1-2 record in games decided by just one goal and are unbeaten in their last seven one-goal contests. Two of the five wins have been decided in overtime, with another win by way of shootout against the Stockton Heat on December 10.

Tucson Roadrunners Road Ahead: Back From The Break
Scroll to top