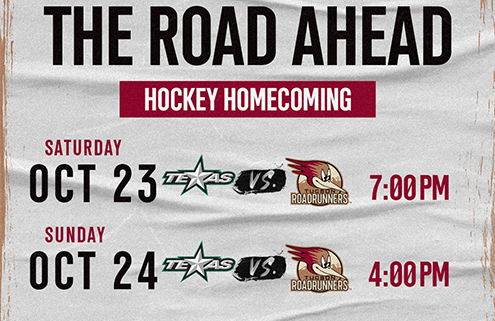 The Roadrunners will be home for each of the next two weekends, meaning there are plenty of opportunities to see some of the Arizona Coyotes top prospects as well as returning fan favorites. Tickets for Opening Weekend and beyond are on sale now and can be found HERE.

The Roadrunners opened the regular season last weekend with a pair of games against the Stockton Heat in California. Goaltending was the main storyline of the weekend, with both teams yielding only three goals over the 121:56 of ice time. Goaltender Ivan Prosvetov recorded a 29-save shutout in the season opener, as the Roadrunners defeated the Heat 1-0 in overtime to start the season with a 1-0 record.

The Roadrunners return home for a pair of games with the Texas Stars, beginning Saturday night at 7:00 p.m. MST. Defenseman Ty Emberson scored his first professional goal against the Stars last May, and forward Ben McCartney made his AHL debut during the same series in the Lone Star State, putting up two points.

Dysin Gets The Call

The Arizona Coyotes announced Monday afternoon that defenseman Dysin Mayo was recalled from the Tucson Roadrunners. The 25-year-old is the only current member of the Arizona Coyotes organization that has appeared in all six seasons with the franchise and has appeared in 228 of the Roadrunners last 232 games. Mayo appeared in each of first two games this season for Tucson, wearing the Captain’s “C” on his sweater. Mayo was originally drafted by the Coyotes in the fifth round (133rd overall) in the 2014 NHL Entry Draft.

In a corresponding move, the Arizona Coyotes have assigned defender Vladislav Provolnev to the Tucson Roadrunners. Provolnev joins Vladislav Kolyachonok on the talented Roadrunners defensive unit, after spending the last six years in the KHL. The elder Vlad recorded a career high 20 points last season (10g 10a) and looks to be an immediate factor on the Roadrunners blue line.

The Roadrunners have one of the most prolific goaltender tandems in the AHL in Ivan Prosvetov and Josef Korenar. Prosvetov earned a 29-save shutout in the season opener, and Korenar followed it up with a 22-save performance the next night. The two combined to allow only three goals in nearly 122 minutes of play over the opening series with Stockton.

The Roadrunners are using their Opening Weekend at the TCC to honor important members of the community. Saturday is Health Care Hero Night, with the team honoring health care workers in Southern Arizona. In addition, Sunday’s 4:00 p.m. game is Teacher Appreciation Day. Fans can nominate a Healthcare Hero or Teacher to be honored at their respective games by clicking the links found HERE.

Seven different skaters made their Roadrunners debuts in Friday night’s season opener against the Stockton Heat. Of those seven, four were making the AHL debuts; Matias Maccelli, JJ Moser, Tyson Empey, and Liam Kirk. Cole Hults, Travis Barron and Vladislav Kolyachonok round out the list of new Roadrunners in Friday’s lineup.