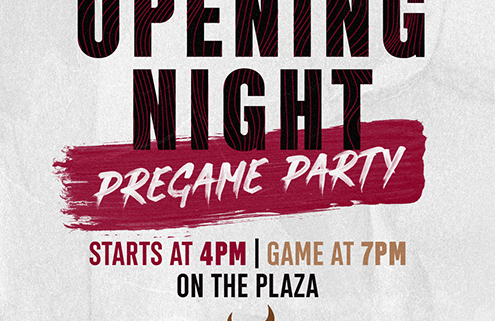 Tucson, Arizona – The Tucson Roadrunners, owned and operated by the Arizona Coyotes, will host the Texas Stars Saturday at 7 p.m. and Sunday at 4 p.m. to open a four-game home stand opening their 2021-2022 regular season home schedule.

Tickets for all 34 home games are available now at TucsonRoadrunners.com/Fun. Patrons entering all Tucson Arena events are required to wear masks.

Saturday’s Opening Night festivities will start at 4 p.m. as Roadrunners players will walk the red carpet on their way into the arena in Lot A by the main box office with Chris O’Gorman from 92.9 The Bull live and entertaining as well leading up to face-off.

Throughout Opening Weekend, the Roadrunners will also be honoring local community heroes with Healthcare Workers being recognized Saturday and Teachers on Sunday.

To nominate a healthcare worker to nominate CLICK HERE

Opening Weekend will also feature the return of popular in-game features with our community partners that include: Chuck-A-Puck, 50/50 Raffle and On-Ice Intermission Entertainment starring the team’s new public address announcers Kim Cota-Robles and Paul Cicala along with Beef and Yasmine in the crowd.

The Roadrunners are excited to welcome The Black N’ Blue Hip Hop Crew who will be performing at Saturday’s game.

Sunday’s game will be the first televised game of the season on The CW Tucson. A complete television broadcast schedule will be released Thursday.

The home stand continues Friday, October 29 and Saturday, October 30 when the Roadrunners will host their I-8 Border Rivals the San Diego Gulls in the first El Lazo de Tucson weekend of the season and a Dia de los Muertos celebration. Walking Tacos and Street Corn will highlight the weekend’s foot specials.