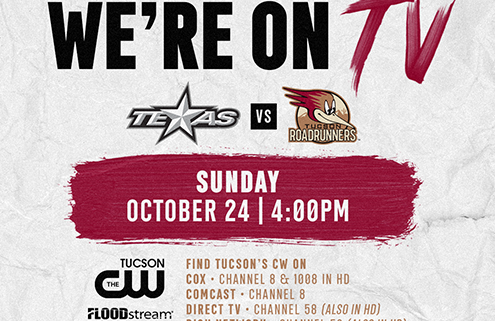 Sunday, October 24 at 4pm Vs Texas

“We’re excited to back on The CW Tucson for another weekend slate of games,” said Roadrunners President Bob Hoffman. “Televising our games gives us another avenue to connect with our fanbase and cultivate new fans as we continue to grow the game in Southern Arizona.”

“We are the lens through which our community sees our community and our partnership with the Roadrunners places a proper spotlight on our local professional sports team,” said Tregg White, vice president and general manager of KWBA and KGUN. “We are proud to play alongside the Roadrunners and look forward to another exciting season of Roadrunners hockey on the CW Tucson.”