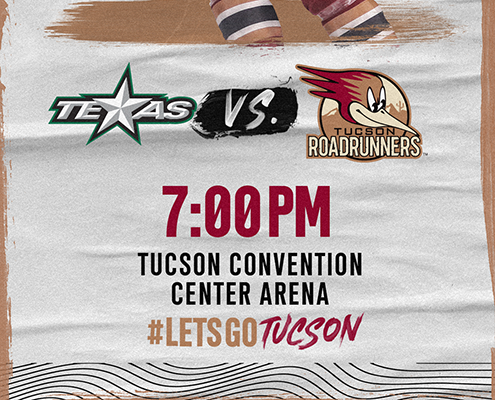 The Tucson Roadrunners return to the Tucson Arena for regular season hockey for the first time since May when they host the Texas Stars for a pair of games this weekend. Tucson’s Home Opener is slated for tonight at 7:00 p.m. MST, marking the first game at the Tucson Arena with an allowed full capacity since March 11, 2020.

Three Things
1) The Roadrunners and Texas Stars both enter the two-game series with 1-1 records. Tucson split last weekend’s pair of games with the Heat in Stockton, while Texas did the same on their home ice against the Iowa Wild. Both teams have an even goal differential, with three goals scored and three goals allowed. The Roadrunners and Stars faced off six times last season, with current Tucson forward Ben McCartney making his professional debut in Texas back in May.

2) Two Roadrunners enter the first home series of the season having scored in each of the first two contests: defender Cam Dineen and forward Matias Maccelli. One of the longest-tenured Roadrunners, Dineen, and one of the team’s four rookies, Maccelli, head into the weekend on a two-game point streak. Dineen recorded ten points in 22 games with Tucson last season and is now in his fourth season with the club. The 21-year-old Maccelli was drafted in the fourth round by the Arizona Coyotes in the 2019 NHL Draft and is looking to extend his scoring streak to begin his professional career.

3) Making his NHL debut Thursday night with the Arizona Coyotes was Roadrunners captain Dysin Mayo. The 25-year-old was drafted by the Coyotes in the fifth round of the 2014 NHL Draft and has suited up for 258 games for the Roadrunners, dating back to the franchise’s inaugural season. Mayo scored his first career NHL goal in the third period of his debut against the Edmonton Oilers.

What’s The Word?
Tucson Roadrunners forward Blake Speers on returning to play on home ice in front of the Tucson crowd after missing the majority of last year due to injury:

“That was a bit of a tough bounce, going down with that injury, but I had to look at it in a positive way and a way that was going to make me stronger. Obviously, there are some things in life you can’t control and that’s one of them. It certainly gave me plenty of time to reflect on some things and find holes in my games and things I can work on both physically and mentally. I’m really excited to show everything I can do and everything I worked on this year.”

Number to Know
3 – The number of goals given up by the Roadrunners in their opening two-game series with the Stockton Heat. Tucson goaltenders recorded a combined 51 saves over 121:56 between the two games. The Roadrunners have a talented goaltender battery in Ivan Prosvetov and Josef Korenar, which have a total of 131 games at the AHL level. All 131 games are from within the Pacific Division, as Korenar spent the last three seasons as a member of the San Jose Barracuda.

We’re Doing It Live
Tonight’s game will be broadcast live on AHLtv, as well as on the radio on Fox Sports 1450AM, or on the iHeartRadio app. Coverage begins at 6:45 p.m. MST with Roadrunners Warm-Up, as Jimmy Peebles gets you ready for the game before “Voice of the Roadrunners” Adrian Denny has the call at 7:00 p.m. live from the Old Pueblo.