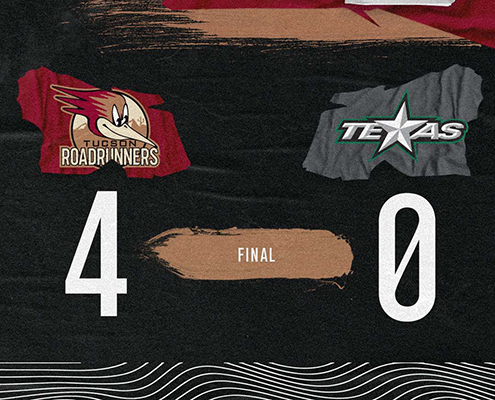 The teams opened the contest trading opportunities on the man advantage, with each squad getting a pair of power-play opportunities in the first period. The score remained even at zero until the final minute of the opening frame, when Roadrunners rookie Liam Kirk buried his first professional goal on this side of the Atlantic Ocean, putting Tucson on top 1-0 as they headed to the locker room for the first intermission. Tucson extended their lead just over four minutes into the middle frame, when Ben McCartney found the back of the net in his season debut with Tucson. Each of the first two goals for the Roadrunners came less than two minutes after killing a penalty. The Roadrunners ended the night a perfect eight for eight on the penalty-kill. The other side of Tucson’s special teams, the power-play, proved to be just as effective later on in the period; when Ben McCartney lit the lamp once again near the midway point of the period to extend the Tucson lead to 3-0. The next goal wouldn’t come for nearly 28 minutes of ice time, but with the Stars net empty, Ben McCartney once again cashed in, securing the hat trick and a 4-0 win for the Roadrunners in their Home Opener, and another shutout for goaltender Ivan Prosvetov.

The Roadrunners wrap up their Home Opener Series with the Texas Stars at the Tucson Convention Center Sunday afternoon at 4:00 p.m. MST. Coverage starts at 3:45 on Fox Sports 1450AM with Roadrunners Warm-Up hosted by Jimmy Peebles. Then, “Voice of the Roadrunners” Adrian Denny will have all the action live from Southern Arizona. Sunday’s game will also be broadcast live on The CW Tucson, their first of seven televised broadcasts this season.

“It was a good performance, starting from our goalie up to our forwards and defense, everyone played a solid game. I think our 200-foot game was good, and so was our discipline when it came to the structure of the game. If we keep playing that way good things will happen.”

Tucson Roadrunners forward Ben McCartney on the overall team performance on a night where the 20-year-old recorded his first professional hat trick.

SPECIAL TEAMS STRENGTH – At the heart of the Tucson Roadrunners 4-0 Home Opener win over the Texas Stars were the special teams units. The penalty-kill held the Stars scoreless in all seven of their man advantages, and the power-play unit added to the scoreboard with a five-on-four goal by Ben McCartney near the midway point of the second period.

Watch Tucson Roadrunners forward Ben McCartney cash in on the empty net in Saturday night’s 4-0 win over the Texas Stars, securing his first professional hat trick. McCartney made his professional debut late last season with the Roadrunners against the Stars, notching a goal and an assist in the Lone Star State.

The Tucson Roadrunners players arrived in style ahead of Saturday night’s Home Opener against the Texas Stars. Pictured here is second-year defenseman Cam Crotty walking the red carpet ahead of the team’s decisive 4-0 victory over the Stars.