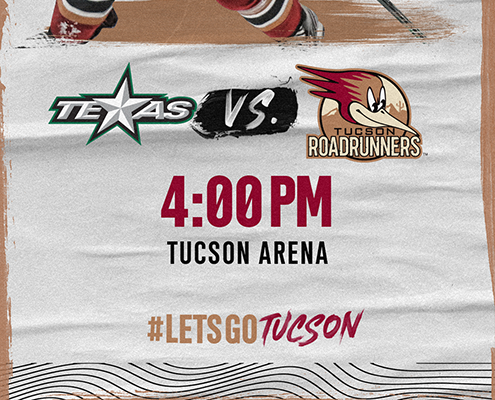 The Tucson Roadrunners wrap up their Home Opener Series with the Texas Stars Sunday afternoon at 4:00 p.m. MST, at the Tucson Arena. Sunday’s game will be the first of seven Roadrunners games to be televised live on The CW Tucson this season. The Roadrunners will look to sweep the series after a decisive 4-0 victory over the Stars Saturday night, which had a pair of standouts in forward Ben McCartney and goaltender Ivan Prosvetov.

Three Things
1) Getting it done on the offense in Saturday night’s Home Opener win were forwards Liam Kirk and Ben McCartney. Kirk opened the scoring in the final minute of the first period, putting the Roadrunners ahead 1-0 with his first professional goal in North America. Ben McCartney took it from there, recording his first professional hat trick to round out the scoring. McCartney had an even-strength goal, a power-play goal, and an empty-net goal to provide the bulk of the scoring for the Roadrunners. The 20-year-old made his AHL debut against the Stars last season in the Lone Star State, where he recorded a goal and an assist in his first game as a Roadrunner.

3) A key part of Saturday’s 4-0 win was Tucson’s special teams units. Forward Ben McCartney and the rest of power-play unit cashed in midway through the second period of Saturday’s contest, pushing the Roadrunners lead to 3-0. On the other end, the Roadrunners penalty-kill helped keep Texas off the scoreboard, as it held the Stars scoreless in all seven of their man advantages throughout the night.

“Last weekend there were chances that just didn’t go our way, but tonight the chances were going in. We just have to keep playing the same way. Ivan played a great game, and so did the defense and every forward. Everyone played a good game tonight and if we just keep playing the right way, chances are going to come, and they’re going to go in.”

Number to Know
10 – The number of Roadrunners players to record a point in Saturday night’s 4-0 win over the Texas Stars. The four goals saw eight different players record an assist, and Ben McCartney was the only skater with multiple points, as he notched his first professional hat trick. This level of puck movement and sharing the offensive responsibilities contributed to the team’s decisive victory.

We’re Doing It Live
Sunday’s game will be broadcast live on AHLtv, as well as on The CW Tucson in Southern Arizona. The game will also be on the radio on Fox Sports 1450AM, or on the iHeartRadio app. Coverage begins at 3:45 p.m. MST with Roadrunners Warm-Up, as Jimmy Peebles gets you ready for the game before “Voice of the Roadrunners” Adrian Denny and Brett Fera will have the call at 4:00 p.m. live from the Tucson Arena.