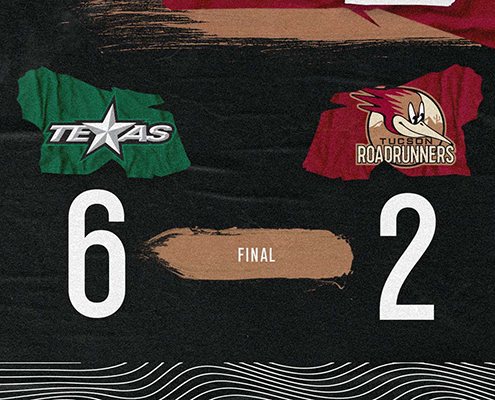 Tucson, Arizona – The Tucson Roadrunners came up short against the Texas Stars Sunday afternoon, in a game that was broadcast live on The CW Tucson in Southern Arizona. Texas jumped out to an early lead and seemed to have an answer any time the Roadrunners fought back. The Roadrunners fall to 2-2 but will be back at the Tucson Arena on Friday for another two-game series, this time against the San Diego Gulls.

Texas opened the scoring with a pair of goals in the opening frame. The first came on the power-play with 9:31 gone by in the first period. They added a second goal, this time on the five-on-five with exactly seven minutes still to play in the period. Tucson began the second period on the man advantage, which led to a temporary shift in momentum that saw the Roadrunners tie the game up at two within the first 4:32 of the middle frame. Jan Jenik got Tucson on the board when he rifled a shot from the point through traffic, and JJ Moser followed it up with a beauty of a wrist shot for his first North American professional goal. The goals came two and a half minutes apart and made it a brand-new hockey game at 2-2. Texas reclaimed their two-goal lead near the midway point of the period, with a pair of goals scored a minute and a half apart, to put them up 4-2. The teams were held scoreless until the final 2:17 of the third period, when Texas cashed in on the empty net and added another insurance goal to seal the win for the Stars.

The Roadrunners will be back on the Tucson ice next weekend with a two-game series with the San Diego Gulls. The first game will be Friday night at 7:00 p.m. MST. Coverage starts at 6:45 on Fox Sports 1450AM with Roadrunners Warm-Up hosted by Jimmy Peebles. Then, “Voice of the Roadrunners” Adrian Denny will have all the action live from the Old Pueblo.

“Obviously it’s nice to get your first goal, it makes you more confident out on the ice. With that being said, I would rather have five goals from our team and none from me.”

Tucson Roadrunners forward Jan Jenik on scoring his first goal of the season in Sunday’s game 6-2 loss to the Texas Stars, after ending last season on a hot streak for the Roadrunners.

FIRST GOAL FOR JJ – Roadrunners rookie defender JJ Moser scored his first professional goal on North American soil in Sunday’s matchup with the Texas Stars. Moser unleashed a shot from the middle of the offensive zone that found its way to the back of the net. The 21-year-old from Switzerland was drafted 60th overall by the Arizona Coyotes in the 2021 NHL Draft.

Watch Tucson Roadrunners rookie defender JJ Moser bury the puck for his first North American professional goal in the second period of Sunday’s game with the Texas Stars. The goal was Moser’s first professional point, after being drafted by the Arizona Coyotes organization in July.

Roadrunners forward Hudson Fasching handles the puck in Sunday’s game against the Texas Stars. The fourth-year Roadrunner picked up his first assist of the season on defenseman JJ Moser’s second period goal.