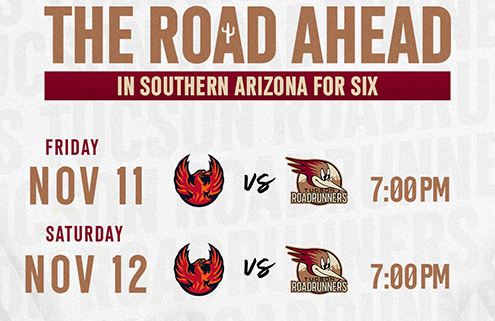 The 6-2-0-0 Roadrunners return home for what is tied for their longest home stand of the season: a six-game slate featuring three different opponents. Tucson is currently 2-0-0-0 at home on the season, and they’ll begin the home stand by hosting the Coachella Valley Firebirds for the first time on Friday and Saturday. Both games are scheduled for a 7 p.m. start. The Firebirds enter the week fourth in the AHL’s Pacific Division at 5-3-0-0, with their last game being a 3-1 road win over Abbotsford on Saturday. The new AHL affiliate of the Seattle Kraken possess a league-leading 4.125 goals per-game, with their 33 total goals tied for the most in the Pacific Division entering the week.

Tucson enters the week in possession of second place in the AHL’s Pacific Division, two points ahead of their next opponent, the Coachella Valley Firebirds. While the Firebirds lead the American Hockey League in goals per-game, the Roadrunners remain one of four teams in the top-ten for both goals per-game and goals against per-game (Manitoba, Ontario, Toronto) with those teams having a combined record of 27-8-1-0. Tucson’s 21 goals allowed is tied for second fewest in the AHL, and their plus-seven goal differential is second best in the Pacific Division. In addition, Tucson is one of two teams leaguewide that has not lost at home this season (Rochester).

The Roadrunners six-game home stand kicks off with the first Faith and Family Night of the season and a magnetic schedule giveaway for the first 1,500 fans, presented by Proforma. The first two-game set will conclude with the Roadrunners Military Appreciation Night, featuring a pregame Hockey & Hops event as well as a post-game jersey auction. The jerseys auctioned off will be Tucson’s game-worn Military Specialty Jerseys, presented by VetTix. Tucson will then welcome the Henderson Silver Knights to town with the first $2 Twos-Day and Kids Free Wednesday of the season on November 15 and 16. They’ll wrap up the ten-day stretch at home with Hockey Fights Cancer Night on Saturday, November 19, against San Jose, with the second Family Day of the season the following afternoon. For more information and to purchase tickets, click HERE.

Roadrunners Alternate Captain and defenseman Cam Dineen and forwards Tyson Empey and Colin Theisen, along with Mascot Dusty took a visit to Tucson’s VA Hospital on Monday to thank the Veterans for their service and hand out goodie bags for Veterans Day Friday as the team prepares for their Military Appreciation Night, Saturday, November 12 at 7 p.m. against Coachella Valley. They will be wearing patriotic themed specialty jerseys with all proceeds from the live postgame jersey auction going to VetTix, a non-profit organization that helps Veterans and their families locally experience sporting and entertainment events.

The Roadrunners are back in Tucson after a 3-1-0-0 road trip across San Jose and Calgary. Tucson swept the Barracuda in their first trip to the new Tech CU Arena, outscoring San Jose nine to four. The series featured the first game to go past regulation this season for the Roadrunners, a 4-3 shootout victory that saw backstop Jon Gillies stop all three San Jose attempts and Adam Cracknell score the lone goal in the shootout. Tucson then faced off with the Calgary Wranglers for the first time since their move up north from Stockton, taking the series opener by a score of 3-1. The Roadrunners were outshot by the Wranglers 30 to nine through the first two periods of the opener, before recording all ten shots in the third and holding their opponent without a shot on goal in a period for the first time in franchise history. Tucson outshot the Wranglers 35 to 29 in the final game of the trip on Friday, but a pair of power-play goals for Calgary secured them a 3-2 victory to snap the Roadrunners five-game winning streak.

The Arizona Coyotes announced Saturday that they had recalled forward Laurent Dauphin from the Tucson Roadrunners. Dauphin leads Tucson in goals with five, including his Opening Weekend hat trick on October 23, against Bakersfield. The 27-year-old was drafted in the Second Round (#39 Overall) by the Coyotes in the 2013 NHL Entry Draft and has since amassed 73 career National Hockey League games (35 with Arizona). Dauphin is currently eighth in Roadrunners franchise history for total points with 71 (33g 38a).

Roadrunners goaltender Ivan Prosvetov has been off to one of the best starts of his professional career through five appearances this season. His 4-0 individual record matches his best start to a campaign (2020-2021) and the 23-year-old is at or near the top of the AHL in terms of save percentage and goals against average. Entering the week, his .951 save percentage is the best in the American Hockey League among qualified backstops, and his 1.53 GAA is second-best in the AHL. Provestov is one of two AHL goalies with at least four wins and no losses (Keith Petruzzelli – Toronto)

The Roadrunners are 4-0 this season in the first contest of a two-game series, outscoring opponents in those games 15 to six. Tucson won each of their series openers on the road by scores of 5-1 and 3-1. At a game-by-game level, the Roadrunners are one of three teams in the AHL that are 5-0-0-0 or better when scoring first (Bridgeport, Providence) and are the only team that is undefeated when leading or tied after each of the first two periods of play.

The bulk of Tucson’s scoring has come in the middle periods of their eight contests so far this season. The Roadrunners have scored nearly half of their total goals in the second period, with 13 of the 28 coming in the middle 20 minutes of play. Tucson’s second-period goal differential of plus-four is the best of any individual frame this year and would be tied for the third-best overall goal differential in the AHL’s Pacific Division, trailing only Ontario and themselves.

Through eight games this season, the Roadrunners have scored 18 of their 28 total goals while skating five-on-five. In addition, the Roadrunners have outscored their opponents by eight while at even strength, which would be good for the sixth-best overall goal differential in the American Hockey League. Tucson’s five-on-five play has helped propel them to a 6-2-0-0 record to start the year, as well as a 5-0-0-0 record when scoring at least three goals.

Tucson’s upcoming opponent, the Coachella Valley Firebirds, represent the Roadrunners closest geographical opponent in 2022-2023. Tucson is both the second stop and second-to-last stop on a current 16-game road trip for the Firebirds, while they await the completion of their new Acrisure Arena. The Roadrunners will be the first opponent at the Acrisure Arena on Sunday, December 18, for the first of four total contests in Coachella Valley this season.

Tucson Roadrunners Happy Hour airs every Tuesday at 5 p.m. on FOX Sports 1450AM and the iHeartRadio app, with a podcast version also available after each episode on the iHeartRadio app. This week, co-hosts Adrian Denny, Brett Fera, and Kim Cota-Robles will be joined by Roadrunners Assistant Coach Zack Stortini. In addition, a new episode of the Tucson Roadrunners Insider Podcast released on Sunday breaking down Tucson’s four-game road trip. “Voice of the Roadrunners” Adrian Denny and TucsonRoadrunners.com’s Jimmy Peebles discussed the 3-1 trip before looking ahead to the upcoming six-game home stand. The podcast, including an exclusive interview with forward Milos Kelemen, can be found on the iHeartRadio App.