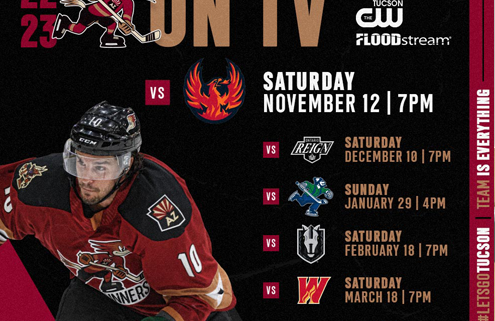 This will be the third season that the Roadrunners and The CW Tucson have teamed up to bring Southern Arizona live coverage of the AHL affiliate of the Arizona Coyotes.

“We’re excited to continue sharing and growing Roadrunners hockey with our community through the television platform on The CW Tucson.” said Roadrunners President Bob Hoffman. “Our partnership to televise Roadrunners games has been well received by the Southern Arizona viewing audience and also given our corporate partners an additional way to connect with our fans,”

“We’re looking forward to another exciting season of Roadrunner Hockey on The CW Tucson,” said Tregg White, vice president and general manager of KWBA and KGUN. “We’ve been televising HBCU football games and a special Northern Arizona University football game on The CW Tucson; so when we have an opportunity to televise live local sports like the Roadrunners, it’s even better.”

All broadcasts will feature live interviews with Head Coach Steve Potvin and select players throughout the game. The first broadcast of the season will feature intermission features on this week’s team visit to Southern Arizona VA Healthcare and a special edition of “My First Roadrunners Game” with Goaltender Ivan Prosvetov.