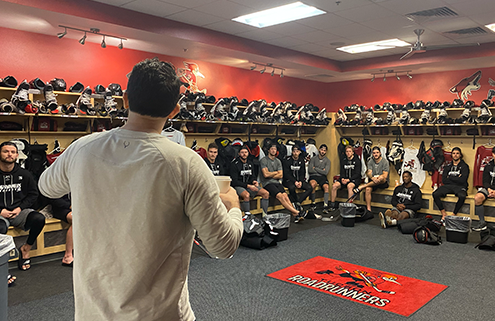 Tucson, Arizona – The Tucson Roadrunners, AHL affiliate of the Arizona Coyotes, are pleased to announce a community partnership with MindReady to support mental health initiatives in the Southern Arizona sports scene.

MindReady is partnering with the Roadrunners to provide mental health coaching and education to the Jr. Roadrunners athletes, parents, and coaches, to further support these young men and women on the ice and in the classroom.

“The Roadrunners are proud to work alongside MindReady to provide mental health education to support and develop athletes within our organization and across Tucson and Southern Arizona.” said Roadrunners President Bob Hoffman.

Built at the height of the pandemic, MindReady is built to provide virtual mental health coaching and education for athletes of all ages, backgrounds, and skill levels. Founded by Jeremy Wolf, a former minor league baseball player with the New York Mets and Olympian with Team Israel, MindReady is designed to work with athletes directly on supporting them on and off the field.

“This is a tool I wish I had as an athlete,” said Wolf, “MindReady is designed to work directly with athletes when they need it and how they need it.”

“Working with the Roadrunners proves that there is a vast community of people dedicated to the mental health and wellbeing of athletes and we could not be prouder to work alongside them and their players to provide a level of support to the next generation of NHL superstars,” said Wolf.

The Roadrunners organization is excited to introduce MindReady at Friday’s game as Wolf will be dropping the ceremonial first puck prior to the contest and appearing during the First Intermission of the Roadrunners radio broadcast on Fox Sports 1450 AM. Fans in the arena will also see more on MindReady with an informational video that will be shown as well. Wolf and Hoffman will also be available for local media interviews as well by contacting Adrian Denny at Adrian.Denny@TucsonRoadrunners.com.

By visiting their website (mindready.co), athletes have the ability to take through an assessment that matches them with a coach in as soon as 24 hours. Additionally, MindReady provides educational resources to parents and coaches to further enrich this community of athletics.

MindReady believes that every athlete, regardless of background or skill level, deserves the opportunity to find lasting success on and off the field.

1-On-1 With Zack Stortini
Scroll to top