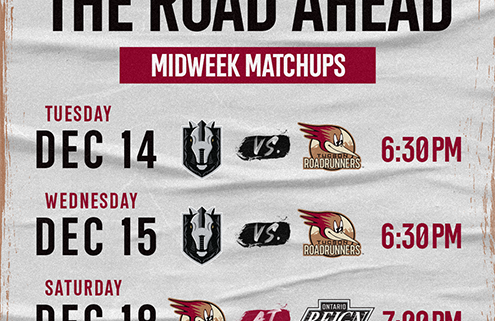 The Roadrunners held their annual Teddy Bear Toss Game Saturday night at the Tucson Arena when they hosted the Stockton Heat. Forward Ryan McGregor netted the special goal late in the second period for the Roadrunners, prompting fans to throw thousands of stuffed animals onto the ice. The stuffed animals were collected and will be donated to Aviva Children’s Services. Over 9,000 fans cheered on the Roadrunners for the series at the Tucson Arena, the largest weekend turnout so far this season.

After kicking off the home stand last weekend with the Stockton Heat, the Roadrunners will welcome the Henderson Silver Knights into town for the first time since April 3 of last season, with a pair of midweek matchups. Both games will feature Arizona-inspired food specials with $2 shredded chicken tacos with toppings, as well as $2 draft beers and Pepsi on Tuesday, followed by enchiladas and spicy ice michelada for $10 on Wednesday. Tickets for both games can be purchased HERE. Then, the Roadrunners will embark on a three-game, two-country road trip beginning with a Saturday night clash against the Ontario Reign.

The Roadrunners began the four-game home stand last weekend with a pair of games against the Stockton Heat. Tucson took the first game of the series by way of shootout, becoming the first team this season to defeat the Heat twice. Goaltender Ivan Prosvetov matched a career high with 47 saves, and Matias Maccelli and Terry Broadhurst each netted shootout goals in the 5-4 victory.

Comebacks In Front Of Our Crowd

Each of the Roadrunners last four wins on their home ice have been a come-from-behind victory dating back to November 12 versus the Ontario Reign. The Roadrunners faced deficits of 2-1 and 3-2 before battling back for an 8-4 win over the Reign. Tucson then swept the Abbotsford Canucks, after the Vancouver AHL affiliate scored first in each of their contests November 26 and 27. The game on November 27 saw the Roadrunners score a pair of goals in the final 5:40 of regulation to come away with a 4-3 victory. Finally, Tucson rallied back from down 4-2 midway through the second period last Friday night to beat the Stockton Heat 5-4 in a shootout.

Goaltender Ivan Prosvetov has started five of the last six games for the Roadrunners, including both matchups against the Stockton Heat last weekend. Prosvetov matched a career-high in saves with 47 in Friday night’s 5-4 shootout win over the Calgary Flames AHL affiliate, and made some clutch stops in the shootout to come away with his sixth win of the 2021-2022 campaign.

Forward Hudson Fasching rejoined the Roadrunners this weekend for the pair of games against the Stockton Heat and recorded a pair of assists in his first game with the team since November 13, a 5-4 shootout win Friday night. Defenseman Quinn Wichers also joined the Tucson roster from the Coyotes ECHL affiliate in Rapid City. He appeared in one preseason game for the team during training camp, and made his regular-season Roadrunners debut Saturday night.

The Roadrunners had four different players score their first goals of the season last weekend against the Stockton Heat. Blake Speers opened the scoring for the Roadrunners Friday night with his first of the season just 3:16 into the first period, followed by Travis Barron and Victor Soderstrom in the second period. Ryan McGregor buried the puck in the second period of Saturday night’s game for his first of the campaign, as well as the Teddy Bear Toss Goal for the Roadrunners. Tucson has now had 18 different players score a goal in 18 games on the season.