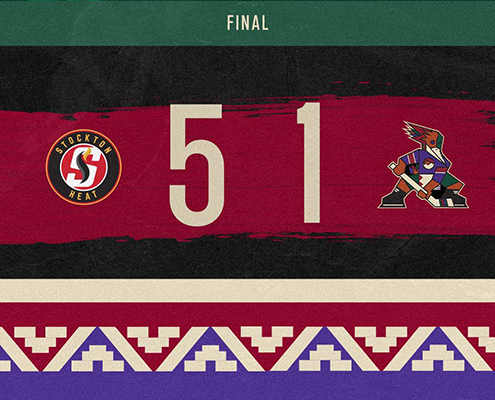 Tucson, Arizona – The Tucson Roadrunners wrapped up their weekend series with the Stockton Heat Saturday night at the Tucson Arena, falling to the Heat by a score of 5-1. The game was Tucson’s annual Teddy Bear Toss Game, and Ryan McGregor netted the goal for the Roadrunners, spawning thousands of stuffed animals onto the ice. Ivan Prosvetov started his fourth-straight game in net for the Roadrunners and made 30 saves.

Fans were on the edge of their seats to start Saturday’s game, as they were anxious to see the Roadrunners score the Teddy Bear Toss goal, but they would have to wait a little longer. Tucson was held scoreless in the first period but rattled off 11 shots on goal in the process. Stockton got on the board first with 4:03 still to play in the opening frame and extended their early lead to 2-0 1:10 later. The score remained at 2-0 as the teams reached the first intermission. Teddy bears were still in the hands of Tucson fans after the first 20 minutes of play. The opening half of the second frame was relatively quiet, as neither team matched their early shot production from the first period. The Heat extended their lead to 3-0 with 6:23 remaining in the middle period, as fans continued to wait to show off their teddy bear-tossing skill. They wouldn’t have to wait much longer, as Ryan McGregor buried the wrap-around goal to get the Roadrunners on the board with 12 seconds left to play in the second period. McGregor’s goal unleased a flurry of teddy bears from every corner of the arena, and mascot Dusty was tasked with clean-up duty as the teams headed off the ice for an early intermission as they waited for the ice to be cleared. The goal marked McGregor’s first of the season and gave the Roadrunners some life heading into the final frame.

With Tucson trailing by a pair of goals, they quickly got a chance on the power-play to open the third period but came up empty-handed. The Heat took advantage of having a fresh skater out of the penalty box to get a goal back, making the score 4-1. Stockton struck again less than 2:30 later to extend their lead to 5-1. That score held firm for the final 14:17 of regulation, and became a 5-1 win for the Stockton Heat, splitting the series with the Roadrunners.

Tucson will remain at home to host the Henderson Silver Knights for a pair of midweek matchups Tuesday and Wednesday at the Tucson Arena. Both games are set to begin at 6:30 p.m. MST, with coverage beginning at 6:15 on Fox Sports 1450AM with Roadrunners Warm-Up hosted by Jimmy Peebles. Then, “Voice of the Roadrunners” Adrian Denny will have all the action live from the Tucson Arena.

“I think these guys have been working incredibly hard for a hockey team. Killing penalties, blocking shots, taking face-offs, doing things that are important to our group that don’t get rewarded or talked about as much. It was good they were able to collect some points this weekend.”

Roadrunners Head Coach Jay Varady on players such as Ryan McGregor, Blake Speers, Travis Barron and Victor Soderstrom, who each recorded their first goal of the season this weekend against Stockton.

CRUCIAL PENALTY-KILL – The Roadrunners held their opponents without a power-play goal for the third time in their last four games Saturday night against the Stockton Heat. Tucson has an 81.1 penalty-kill percentage (PK%) on the season and are now 7-1 when not allowing a power-play goal.

Watch Roadrunners forward Ryan McGregor net the fifth Teddy Bear Toss Goal in franchise history, slipping the puck past Stockton goaltender Dustin Wolf with 12 seconds remaining in the second period. The goal was McGregor’s first of the season and got the Roadrunners on the board in Saturday night’s matchup with the Stockton Heat.