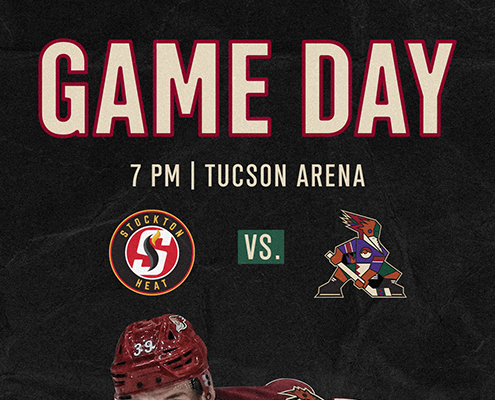 The Tucson Roadrunners will look to win their fourth-straight home matchup Saturday night, when they’ll once again host the Stockton Heat. Tucson won the first game of the series Friday night in exciting fashion, coming back from down 4-2 to win in a shootout 5-4. The Roadrunners have now won five of their last six games, as well as five of their last six at home, including three-straight at the Tucson Arena dating back to November 26.

Three Things
1) Tucson is coming off a 5-4 shootout win over the Stockton Heat Friday night, taking the first game of the series. The Roadrunners were down 4-2 at the midway point of the second period but rallied back to force overtime and take the contest to a shootout. Shootout goals from Matias Maccelli and Terry Broadhurst, and clutch saves by goaltender Ivan Prosvetov were all the Roadrunners needed to come away with the shootout win. The game marked Tucson’s first shootout win since March 7, 2020, versus Chicago, which was the last time the Roadrunners went to a shootout.

2) After coming back from down two in the second period of Friday night’s game against the Stockton Heat, the Roadrunners now have three-straight comeback wins on their home ice. The Abbotsford Canucks struck first in each of the two meetings between Tucson and the Vancouver Canucks AHL affiliate on November 26 and 27. The Roadrunners came back to win both of those games, including a third period come-from-behind win on November 27 when they scored two goals in the final 5:40 of regulation to earn a 5-4 win and series sweep over Abbotsford.

3) Saturday’s game at the Tucson Arena is the Roadrunners annual Teddy Bear Toss game. Fans can bring new stuffed animals to toss onto the ice after the Roadrunners first goal of the game. The stuffed animals will be collected and donated to Aviva Children’s Services. Saturday’s game will also be televised live in Southern Arizona on The CW Tucson, the second of seven televised Roadrunners games this season and first of two televised games against the Stockton Heat.

“Those are obviously two great players. I have some familiarity with [Hudson Fasching] from previous years. It clicked really well, and those are guys that play kind of like I do. They’re detail-oriented and play good defensively, and obviously that leads to good things offensively.”

Number to Know
3 – The number of Roadrunners players to score their first goal of the season in Friday night’s 5-4 shootout win over the Stockton Heat. Blake Speers opened the scoring for the Roadrunners with his first goal of the season just 3:16 into the contest, followed by Travis Barron and Victor Soderstrom each netting their first scores of the 2021-2022 AHL campaign to tie the game up at four goals apiece late in the second period.

We’re Doing It Live
Tonight’s game will be broadcast live in Southern Arizona on The CW Tucson on AHLtv, as well as on the radio on Fox Sports 1450AM, or on the iHeartRadio app. Coverage begins at 6:45 p.m. MST with Roadrunners Warm-Up, as Jimmy Peebles gets you ready for the game before “Voice of the Roadrunners” Adrian Denny has the call at 7:00 p.m. live from the Tucson Arena.