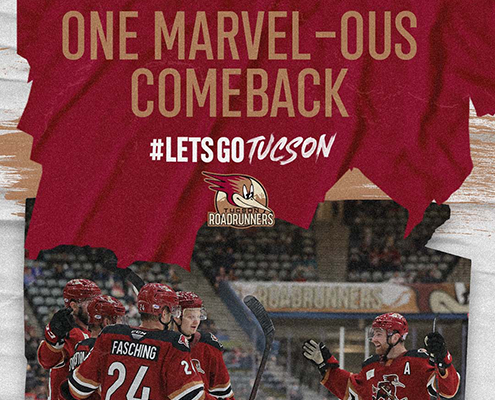 Tucson, Arizona – The Tucson Roadrunners hosted the Stockton Heat for the first time since February of 2020 Friday night at the Tucson Arena, in a game that included two teams that were winners of four of their last five. The Roadrunners came back from down 4-2 to force overtime and eventually reach a shootout, where they came away with the victory. Tucson goaltender Ivan Prosvetov had a night to remember, as he matched his career-high in saves with 47 for his sixth win of the season.

The Roadrunners struck first in Friday’s contest when the puck took an odd bounce off of Blake Speers’ stick and into the back of the net past Stockton goaltender Adam Werner. The goal was Speers’ first of the season and gave Tucson a 1-0 lead just 3:16 into the opening frame, the fastest goal to start a game for the Roadrunners on the season. Stockton rallied back with a pair of goals less than two minutes apart to take their first lead of the night at 2-1. The Heat were aided by an unexpected bounce of their own on the first goal, which came with 7:47 to play in the first period. Both teams stayed out of the penalty box during the first period, and the score stood at 2-1 in Stockton’s favor after 20 minutes of play. After scoring just 3:16 into the first period, the Roadrunners nearly matched the feat in the second, with a goal scored 3:42 into the frame by Matias Maccelli. The goal marked Maccelli’s team-leading seventh of the season and tied the game back up at two. The game didn’t stay knotted at two for long, as Stockton went back down the other end and retook the lead 1:18 later. The score remained at 3-2 for just over two minutes, until the Heat extended their lead with a score from between the face-off dots. Stockton linemates Jakob Pelletier and Matthew Phillips combined for the Heat’s first four goals, each scoring once per period over the first 40 minutes. Tucson pulled to within one with a goal fresh off their second penalty-kill of the evening, when Hudson Elynuik came out of the box to set up Travis Barron for a wide-open chance on Stockton goaltender Adam Werner. Barron delivered, and the Roadrunners only trailed 4-3 with 8:55 to play in the second period. Victor Soderstrom evened up the score for the Roadrunners with just 2:39 to play in the middle frame with his first goal of the season. With the score even at four goals apiece, the third period saw both teams turn up the intensity early on. Tucson went on an early power-play for goaltender interference on Ivan Prosvetov, but Stockton held firm on the penalty-kill. Prosvetov was clearly up to the task the third period brought, as he turned all 15 shots aside in the final 20 minutes to force overtime. The Roadrunners came close on several occasions during the extra three-on-three period but couldn’t make it happen, and a shootout was needed to decide the outcome of Friday’s game. Matias Maccelli scored in the first round of the shootout, but Stockton followed it up with a first-round score of their own. The teams were blanked in the second and third rounds, but Terry Broadhurst netted the eventual game-winner in the fourth round, and one final Prosvetov save secured the 5-4 win for the Roadrunners.

The Roadrunners will once again take on the Stockton Heat Saturday night at the Tucson Arena, for the team’s Teddy Bear Toss game. The game will also be broadcast live in Southern Arizona on The CW Tucson at 7:00 p.m. MST, with coverage beginning at 6:45 on Fox Sports 1450AM with Roadrunners Warm-Up hosted by Jimmy Peebles. Then, “Voice of the Roadrunners” Adrian Denny will have all the action live from the Tucson Arena.

“Stockton] has a good team and they played a great game tonight. All we have to do [Saturday] is play the same way. Scoring five goals again would be awesome, but it’s not going to be easy. Every team works hard, they put in a lot of time like we do. It will be hard, but we’ll be ready for it.”

Roadrunners goaltender Ivan Prosvetov on the possibility of sweeping the Pacific Division-leading Stockton Heat with another win Saturday night at the Tucson Arena.

COMEBACK CREW – The Roadrunners secured their third-straight come-from-behind victory at home when they defeated the Stockton Heat 5-4 in a shootout. Tucson is now 5-1 in their last six games at the Tucson Arena, taking down four different teams (San Diego, Ontario, Abbotsford, Stockton) in that span.

Watch the decisive fourth round of the Tucson Roadrunners 5-4 shootout victory over the Stockton Heat Friday night at the Tucson Arena. Terry Broadhurst netted the decisive goal for Tucson, and goaltender Ivan Prosvetov shut down the Heat on the other end to seal the win.

Tucson Roadrunners forward Blake Speers smiles after scoring his first goal of the season in the opening period of Friday night’s 5-4 shootout win over the Stockton Heat. The goal was Tucson’s first of the contest and was the fastest goal to start a game by the Roadrunners this season.