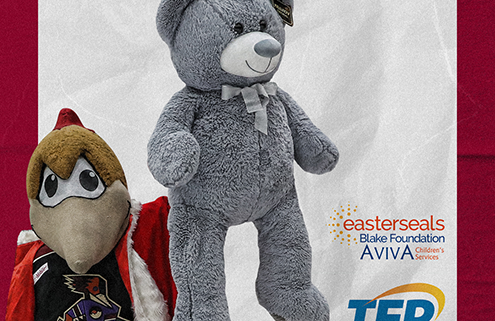 Tucson, Arizona – The Tucson Roadrunners have partnered with Tucson Electric Power to host their annual Teddy Bear Toss after the team’s first goal of Saturday night’s game with Stockton at 7 p.m.

After the Roadrunners first goal, fans are invited to throw new stuffed animals onto the ice that will be donated to Aviva Children’s Services to assist in their efforts to serve our community during the holidays.

Roadrunners Give Back This Weekend
This weekend at the Roadrunners Give Back table, located at the top of Section 216, we’ll have a lot going on! On Friday, December 10th, you can buy Mystery Ornaments signed by the 2021-22 players for $20 each. You can also place your bid on our Spiderman signed Spiderman Bear in preparation for Teddy Bear Toss! Also, be sure to stop by and grab your 50/50 tickets, for your chance at half of the jackpot, the other half going to Higher Ground. On Saturday, December 11th we’ll be fully prepared for Teddy Bear Toss. We’ll have some bears for purchase, at $10 each, in case you didn’t have a chance to grab any cuddly friends. We will also be hosting our Build-A-Bear Silent Auction!! We have bears (and other animals) that were built by #8 Michael Carcone, #17 Terry Broadhurst, and #31 Zane McIntyre up for auction. We will also have team signed bears available to be bid on. The proceeds of the bear auction will go to Aviva Children’s Services, as well as all of the bears that will be thrown during the Teddy Bear Toss!

About Aviva Family Services
For over 40 years, Aviva Children’s Services has worked to fulfill its mission to improve the quality of life for children who are victims of neglect, abuse and poverty and are in the care of Arizona’s Department of Child Safety (DCS). Aviva responds to the needs of children in foster care by providing programs and resources to enhance their self-esteem and well-being as well as supplying necessity items such as clothing, shoes, blankets and personal care items.