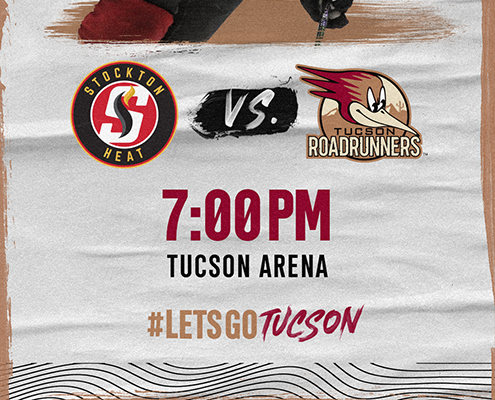 Two red-hot teams in the Tucson Roadrunners and Stockton Heat, both winners of four of their last five, will battle at the Tucson Arena Friday night for the first of two games against the Calgary Flames AHL affiliate. The Roadrunners are kicking off a home stand that features four games in six nights, beginning with the Heat Friday and Saturday. Friday’s game marks the first meeting between these two teams since the opening weekend of the season. The Roadrunners will be hosting a special guest at the game as Spider-Man will be entertaining fans throughout the evening.

Three Things
1) Tucson opened their season on the road against the Heat October 15 and 16, splitting the series in Stockton. The Roadrunners 1-0 overtime victory on Opening Night was the Heat’s only loss of the season until November 13, when they fell to the Henderson Silver Knights in overtime. The Roadrunners have a 20-11-0-1 record all-time against the Heat and a 7-2-0-1 record against Stockton over their last ten meetings, dating back to March 16, 2019. Tucson has outscored Stockton 34-28 over that span.

2) The Roadrunners enter the series having won four of their last five games against three different opponents. In those four wins, Tucson has more than doubled their opponents in goal production, averaging 3.75 goals scored per game to their opponent’s 1.75. Linemates Mike Carcone and Matias Maccelli have recorded at least a point in each of the four wins, combining for 13 total. Carcone is also one of three Roadrunners to notch a multiple-goal performance during that stretch, joining forwards Cameron Hebig and Hudson Elynuik.

3) The Arizona Coyotes assigned forward Hudson Fasching to the Tucson Roadrunners on Thursday. Fasching has appeared in seven for the Coyotes this season and returns to the Roadrunners with 10 points in as many games, including a five-point performance on October 30 against the San Diego Gulls, which included a hat trick. Fasching was tied was for the team lead in scoring when he last suited up for the Roadrunners on November 13 against the Ontario Reign. He scored his first goal of the season against the Heat on Saturday, October 16 in Stockton.

“As soon as I got into pro hockey, I’ve never had an easy game. The team in last place can beat the team in first place on any given night. In the NHL, the AHL, the ECHL, it’s all the same… We know [Stockton] is a good team but we’re a top team too.”

Number to Know
3 – The number of individual power-play goals this season scored by Roadrunners rookies Matias Maccelli, Ben McCartney, and JJ Moser. Their nine total scores while on the man advantage are nearly 70 percent of Tucson’s total power-play output, and the trio are tied for third-most power-play goals by rookies in the AHL.