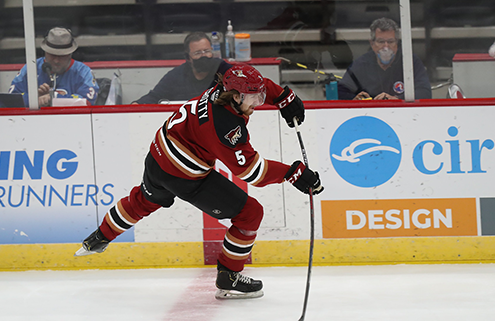 Monday afternoon, the Arizona Coyotes announced the following players have been assigned to the Tucson Roadrunners for their training camp, beginning the same day:

In addition, the Coyotes placed forward Michael Carcone on waivers and will assign him to Tucson if he clears the next day.

These players will be joining the existing training camp roster already in Tucson.

The Tucson Roadrunners held their 2021 Fan Fest Sunday, October 3 at Crossroads at Silver Bell Park in Marana. Serving as a kickoff for the hockey season, fans donated thousands of cans of food benefitting the Community Food Bank of Southern Arizona, while also raising thousands of dollars for the Junior Roadrunners and Roadrunners Give Back, a branch of the Arizona Coyotes Foundation, through their team sale. Said Roadrunners President Bob Hoffman, “There were so many activities for our fans to take part in. We had inflatables, food trucks, as well as a garage sale benefitting the Junior Roadrunners. We also collected several cans of food for the Southern Arizona Food Bank. We’re really excited about the turnout and what we were able to accomplish for the Tucson community.”

Returning To The Roster

Defenseman Dysin Mayo will be returning to the Tucson Roadrunners for his sixth season with the club. Mayo is the longest-tenured Roadrunner, and the only remaining player from the team’s inaugural season in 2016-2017.

As part of Hispanic Heritage Month, the Roadrunners will be continuing their Golden Ticket Raffle. This week’s partner is Mariachi Los Diablitos de Sunnyside High School, with all proceeds benefitting this program. TucsonRoadrunners.com/HHM has all the information about Sunnyside High School and their program.

Back On The Airwaves

The Tucson Roadrunners Happy Hour returns on Tuesday, October 5, from 5pm to 6pm on Fox Sports 1450 AM and the iHeartRadio app. Adrian Denny and Brett Fera will look ahead to the preseason slate of games in their first episode of the season, along with a very special guest. In addition to Roadrunners Happy Hour making its return, the Tucson Roadrunners Insider Podcast has moved to Mondays, where Adrian Denny and Jimmy Peebles drop new episodes every week, where they talk most things Roadrunners, as well as the wide world of sports in Southern Arizona. The half-hour podcast can be found on the iHeartRadio app.