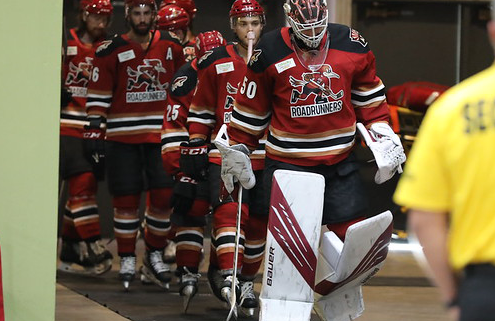 Who’s on the Schedule
The Tucson Roadrunners will play their final two games with their I-8 border rivals, the San Diego Gulls this weekend in Irvine, California. The Gulls lead the AHL Pacific Division in points but have played five more games than the next closest team (Henderson). The Gulls have the third-best point percentage in the division, behind only the Henderson Silver Knights and Bakersfield Condors. San Diego is currently on a four-game point streak, going 3-0-1-0 in that span.

Roadrunners Rookies Open The Scoring
In each of the Roadrunners three games against the Colorado Eagles last weekend, the first goal for Tucson was scored by a different rookie skater. In the series opener Thursday, defenseman Victor Soderstrom put the Roadrunners up 1-0 less than eight minutes into the first period with his second goal of the season. Nate Sucese took half as long to do the same, scoring his sixth of the year 3:31 into the first period Friday night. Sucese then assisted on fellow first-year forward Ryan McGregor’s goal Sunday afternoon in the series finale against the Colorado Eagles.

McGregor Makes A Quick Score Sunday
Speaking of Ryan McGregor’s goal on Sunday, the score set a season record for fastest goal to open a period by the Roadrunners, at 36 seconds. McGregor also has the fastest Tucson goal to open a game, at 2:12 into the first period on March 20 versus the San Diego Gulls. The goal was McGregor’s first of two in that period, with the second ending up as the game winner as the Roadrunners defeated the Gulls by a score of 6-2. McGregor added an assist on a Jeremy Gregoire goal late in the first period to earn him the first three-point performance of his professional career. McGregor signed a three-year entry-level contract with the Arizona Coyotes last March, after serving as captain of the OHL’s Sarnia Sting for the past two seasons.

Sucese Staying Solid
Leading the Roadrunners rookies this season has been forward Nate Sucese. Sucese has three points in the last five games and leads Tucson rookies in both goals and points. Sucese is tied for third among active members of the Roadrunners roster in total points with 11. Along with Ryan McGregor, Sucese was also signed to a three-year entry-level contract with the Arizona Coyotes last March, out of Penn State University.

Honoring Leighton Accardo
Beginning on Thursday, April 22 and lasting for the remainder of the season, the Tucson Roadrunners will wear a special helmet sticker to honor Arizona Coyotes Ring of Honor member Leighton Accardo. Accardo, who was beloved by the Coyotes organization, passed away on November 24, 2020 after a courageous battle with cancer. On April 17, she become the first individual who is not player, coach, general manager, or broadcaster, to be inducted into a team’s Ring of Honor in Arizona and the entire NHL. In addition to the helmet decal, the team auctioned off helmets signed by players, with the proceeds going to the Leighton Accardo Scholarship Fund, which provides financial assistance to girls interested in playing hockey in Arizona.

For The First Responders
Sunday’s Tucson Roadrunners game was First Responder’s Day at the Tucson Arena, as the Roadrunners teamed up with Banner Health to host the event as they took on the Colorado Eagles. The team honored Pima County first responders and health workers, with the starting lineups read by vaccination site employees and volunteers and presented on the video board. Along with the games going on inside the TCC this weekend, outside the building was a vaccination site for both Friday and Sunday’s Roadrunners games.

Did You Know?
Sunday’s Roadrunners game against the Colorado Eagles marked the 1800th career game in professional hockey worked by Tucson Head Equipment Manager Eric Bechtol. Bechtol, a Kalamazoo, Michigan native, joined the Roadrunners in July of 2016 after working for the Coyotes’ ECHL affiliate Rapid City Rush. He has been with the Roadrunners for all five of their years in Southern Arizona.

Around the Pacific Division
With the Roadrunners heading out on the road to take on the San Diego Gulls, the Colorado Eagles return home to host the Ontario Reign for a series beginning Wednesday, April 28. Meanwhile, the San Jose Barracuda are at home for the week, welcoming both the Bakersfield Condors and Henderson Silver Knights. In between their games with San Jose, the Condors and Silver Knights will be clashing with each other once in Bakersfield.