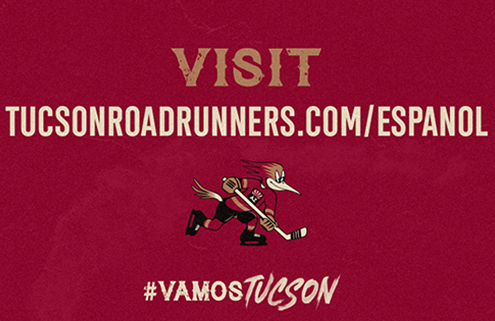 Tucson, Arizona – The Tucson Roadrunners, the American Hockey League affiliate of the Arizona Coyotes, today kicked off their Hispanic Heritage Month celebration with the launch of TucsonRoadrunners.com/Espanol.

“TucsonRoadrunners.com/Espanol provides a complete 360-degree experience of Roadrunners hockey for our Spanish speaking community in our hockey budding cultural region here in the desert ” said Roadrunners President Bob Hoffman. “The site will have fresh content for new fans to read and learn about the team in Spanish and also have the ability to correspond and purchase tickets directly from our Spanish speaking representatives.”

In addition, the team has launched an exclusive Spanish Facebook page at Facebook.com/LosTucsonRoadrunners.

Next week, the Roadrunners will announce details for their special Hispanic Heritage Month Fiesta prior to the Arizona Coyotes preseason game against Anaheim at 2 p.m. on Sunday, September 25 at Tucson Arena. Tickets are available at TucsonRoadrunners.com/Yotes.

The Opening Weekend of the regular season is Saturday, October 22 and Sunday, October 23 at 4 p.m. when the Roadrunners will host Bakersfield. Tucson will host Henderson in their lone home preseason game on Friday, October 7 at 7 p.m. Tickets for all games are available at TucsonRoadrunners.com/Fun.

1-On-1 With Roadrunners Defenseman Devante Stephens
Scroll to top