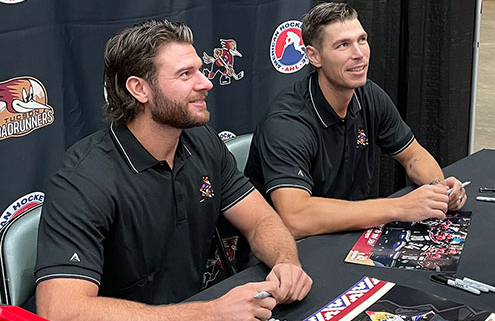 On a special edition of the Roadrunners Insider Podcast live from Fan Fest at the Tucson Arena, Roadrunners forwards Tyson Empey and Adam Cracknell joined Jimmy Peebles and Guest Host Kim Cota-Robles to talk about the upcoming season. The full episode, including a recap of Tyson and Adam’s hockey careers, can be found on the iHeartRadio App or by listening below.

Listen to “Live From Fan Fest!” on Spreaker.

Q: Tyson, welcome back to Tucson, how are you?

Tyson Empey: I’m doing well, it’s good to be back down here in Tucson. It’s been awesome getting to train with all the guys and get ready for the season. I’m ready to get some games going and play in front of these awesome fans.

Q: You two have been hanging out together a bit, tell us about that.

Empey: It was good, I got in (to Tucson) last night and met Adam for the first time. I walked through the door, and he had steaks ready for me. So that was a pretty good first impression, and then we were downtown and decided to go to the (University of Arizona) football game. That was a pretty cool experience.

Tyson Empey joined Adrian Denny and Jimmy Peebles on the Insider Podcast earlier this offseason and afterwards signed a one-year contract to return to the desert. That podcast can be found in the iHeartRadio App or by listening below.

Listen to “Game Sevens Galore With Tyson Empey” on Spreaker.

Q: Are you looking forward to the upcoming season?

Adam Cracknell: It’s been a long summer of waiting. Coming to a new place and getting thrown right into it with Fan Fest and getting to meet everybody and see the arena, it’s going to be an exciting year.

Q: Adam, tell us about your trip down here from BC, driving a U-Haul.

Cracknell: It wasn’t bad, a 22-hour drive. It was worth it, I got to get settled into the house yesterday and like Tyson was saying we went to the football game. I got to really take things in on the first day and it was a lot of fun. Hopefully we get to go to more.

Adam Cracknell made his Insider Podcast debut earlier in the summer after his signing was announced by the Roadrunners. That episode can be found by listening below, or in the iHeartRadio app.

Listen to “Into August: With Adam Cracknell” on Spreaker.

Q: This is your first time being able to interact with the Tucson fans, what do you think?

Cracknell: It’s awesome, especially after the last couple of years where we haven’t been able to meet anybody or be plugged into the public. They get to see us and we get to meet them, and we’ll be seeing a lot of each other this season.

Empey: It’s been awesome, these events are always a lot of fun. Obviously with Covid, it sucked not being able to do stuff like this. Being able to be out here and meet all the fans has been a lot of fun.

Q: How much of Tucson have you seen so far?

Cracknell: We went down University Street, and it seemed like a great atmosphere with lots of places to check out. I’m looking forward to the [Reid Park] Zoo, and I’m sure there’s lots of hidden gems here.

Empey: We do a lot of stuff in the gym, lifting weights and a lot of jumping and running outside. There’s a big different between being in shape and being in hockey shape, there’s a lot of stuff you can’t get unless you’re actually on the ice.

Cracknell: A lot of stuff on the track, agility, nothing compares to being on the ice. You can get your strength up and stay in shape, but I’m always sore after my first couple skates of the year. You think you’ve trained all summer but as soon as you get on the ice you realize “oh, there’s that muscle.”

Q: You’ve been working out up in Scottsdale leading up to this weekend, have you been training with some of your Roadrunners teammates?

Empey: I really like Dukes of Hazzard
Cracknell: I like that new Top Gun. Both of them are obviously really good.

Q: (From Roadrunners fan Liam) What advice would you have for someone that wants to grow up and play for the Roadrunners?

Cracknell: Have fun and work hard, that’s all we did. Keep learning, watch a lot of hockey.

12 Ticketed To Roadrunners From Coyotes Training Camp
Scroll to top