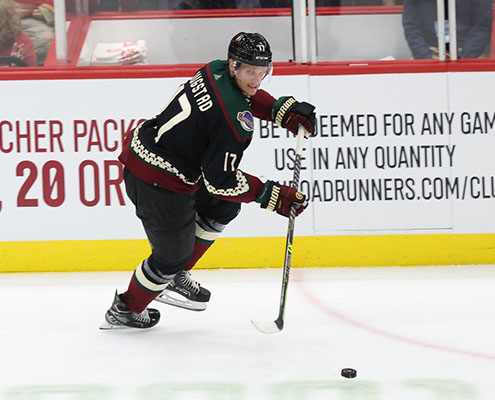 Tucson, Arizona – The Arizona Coyotes continued their preseason slate Sunday afternoon with their only exhibition contest to take place in the state of Arizona, as they played host to the Anaheim Ducks at the Tucson Arena. A raucous crowd of 4,780 of the Tucson faithful made their way to the rink to see the parent club of their Roadrunners in action. The game marked the second-ever NHL preseason game in the Old Pueblo, exactly five years after another Ducks-Coyotes tilt on September 25, 2017. The Coyotes fell to the Ducks by a score of 3-2, as original Roadrunner Christian Fischer tallied a multi-point outing (1g 1a). Arizona employed a goalie tandem of starter Karel Vejmelka and backup Anson Thornton, while Anaheim stuck with a familiar Tucson foe in backstop Lukas Dostal, who has appeared in net five times against the Roadrunners last season as a member of the San Diego Gulls.

Arizona opened the scoring with 7:13 gone by in the first period, as forward Liam O’Brien took a pass from former Roadrunner Christian Fischer and buried it for a 1-0 lead. Anaheim answered back 8:44 later, with a goal by Pavol Regenda to even the score at 1-1. The Ducks took their first lead of the night with 1:05 remaining in the opening frame, as rookie Tristan Luneau lit the lamp. Both Ducks goals in the first period were assisted by Rocco Grimaldi and former San Diego Gull Isac Lundestrom. The next 16:49 were without a goal, before the trio of Lundestrom, Grimaldi, and Luneau once again combined for a Ducks goal, this time scored by Lundestrom to make it a 3-1 advantage. The score marked the lone goal of the middle frame, but the second period wasn’t without action, as Tucson fan favorite Mike Carcone exchanged blows with Ducks defenseman Max Jones. Carcone motioned to the Tucson crowd after the bout, as the 26-year-old has appeared in 83 games with the Roadrunners over the last two seasons, leading the team in goals both years. The score would remain at 3-1 in Anaheim’s favor until original Roadrunner Christian Fischer brought the Coyotes to within one in the final 1:25 of the third period. The goal came with an extra Coyotes attacker and ended the longest scoreless stretch of the afternoon at 22:51 Assisting on the score were first-round pick Dylan Guenther and veteran defenseman Shayne Gostisbehere. The score would remain at 3-2 as time ran out on the Coyotes first trip down Interstate 10 in exactly five years.

Five former Tucson players took the ice for the Coyotes in Sunday’s preseason matchup, including original Roadrunner Christian Fischer, who finished the game with a goal and an assist. Also among the forward lines were Mike Carcone (2020-2022), Ben McCartney (2021-2022), and Lawson Crouse (2017-2018). Carcone fired up the familiar Tucson crowd midway through the second period when he dropped the gloves with Anaheim’s Max Jones. Also in the lineup for Arizona was defenseman Vlad Kolyachonok, who suited up for 33 games with the Roadrunners and 32 games for the Coyotes in his rookie season last year.

Prior to Sunday’s exhibition contest between the Ducks and Coyotes, the Roadrunners hosted a pregame fiesta for fans of all ages outside the Tucson Arena as part of the team’s Hispanic Heritage Month celebration. The celebration of hockey returning to the desert featured Coyotes and Roadrunners mascots Howler and Dusty, inflatables, plenty of food and beverages, and music from Mariachi Los Diablitos de Sunnyside High School. After the game, an exclusive signing event was held on the Roadrunners Party Deck, featuring Tucson Fan Favorites Christian Fischer, Lawson Crouse, and Ben McCartney.

“I like the way the guys fought back in the game. It was good to be in front of our fans and our people. We look forward to coming back… I came [to Tucson] a few times last year to watch a  game and see the crowd, and watch our players and see their growth. We had a few guys in the lineup tonight that played for Tucson last year, it’s nice to have that link between our players and the crowd.”

Arizona Coyotes Head Coach André Tourigny on the atmosphere at the Tucson Arena Sunday afternoon as NHL hockey returned to the Old Pueblo for the first time since 2017.