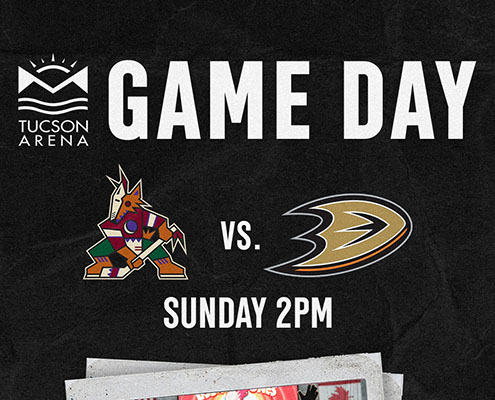 NHL hockey returns to the Old Pueblo as the Arizona Coyotes will play host to the Anaheim Ducks at the Tucson Arena Sunday afternoon at 2 p.m. MST. The game will mark the Coyotes’ second preseason contest and their only one in the state of Arizona. The game will feature several Roadrunners alumni, as 19 players on Arizona’s Training Camp Roster have appeared for both the Roadrunners and Coyotes over the last six seasons.

Three Things
1) Sunday’s preseason game will be the first NHL matchup in Tucson since the Coyotes took on the Ducks exactly five years ago on September 25, 2017, also at the Tucson Arena. The Ducks defeated the Coyotes by a score of 6 to 4, backed by a pair of goals by current Arizona forward Nick Ritchie. Forward Lawson Crouse represents the only current Coyote to suit up in that game for Arizona, as the then 20-year-old was coming off a 72-game rookie season in the desert with the Coyotes in 2016-2017. Crouse went on to appear in 56 games for Tucson in 2017-2018, as he recorded 32 points (15g 17a) in his lone year in the Old Pueblo.

2) The Tucson Arena will be hosting the Coyotes’ only preseason contest this year to take place in the state of Arizona. The Coyotes will be the designated home team for their first two preseason tilts, before being the away team for the final five tune-ups leading into the regular season. They’ll begin their exhibition slate Saturday by taking on the St. Louis Blues at the INTRUST Bank Arena in Wichita, Kansas, home of the ECHL’s Wichita Thunder. Arizona’s next preseason matchup after Sunday in Tucson will be against the Dallas Stars at the BOK Center in Tulsa, Oklahoma, home of the ECHL’s Tulsa Oilers. They’ll return to NHL barns for the following three games against the Anaheim Ducks, Vegas Golden Knights, and Vancouver Canucks in their respective arenas. Finally, they’ll close out the 2022-2023 Preseason against the Golden Knights at the Idaho Central Arena in Boise, Idaho, home of the ECHL’s Idaho Steelheads. In all, the Coyotes will be playing in seven different buildings across seven different states/provinces.

3) Sunday’s matchup of the Anaheim Ducks and Arizona Coyotes is the NHL equivalent of the Roadrunners taking on their I-8 Border Rivals, the San Diego Gulls. The Coyotes Training Camp Roster features 19 players that have suited up for the Roadrunners over the last six seasons, as well as 16 players that appeared with Tucson in 2021-2022. The roster includes fan favorites Christian Fischer, Lawson Crouse, and Dysin Mayo. On the other side of the ice, the Ducks are the parent club of the Gulls, and their Training Camp Roster features a total of 20 Gulls players from last season. The roster includes forward Hunter Drew, who dropped the gloves twice against Tucson (both times with Tyson Empey) and goaltenders Lukas Dostal and Olle Eriksson Ek, who the Roadrunners faced a combined nine times.

“I certainly remember [Tucson] being my first stop coming to the organization from overseas. The first memories I have from this journey were in Tucson, and they’re really nice memories.”

Coyotes defenseman JJ Moser on what he remembers from his time in Tucson with the Roadrunners. The 22-year-old tallied 12 points (5g 7a) in just 18 AHL games before making his NHL debut with Arizona on December 15, 2021.

Number to Know
11 – The number of players on Arizona’s Training Camp Roster that took the ice for both the Roadrunners and Coyotes last season. Among them, seven made their National Hockey League debuts in 2021-2022, including: Dysin Mayo, Cam Dineen, Ben McCartney, JJ Moser, Vlad Kolyachonok, Mike Carcone, and Matias Maccelli.