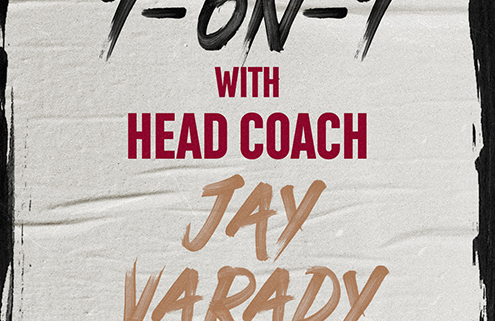 Last week, Tucson Roadrunners Head Coach Jay Varady joined “The Voice of the Roadrunners” Adrian Denny and Jimmy Peebles from TucsonRoadrunners.com on the first offseason edition of the Tucson Roadrunners Insider Podcast. For the full interview, including his favorite place to eat in Tucson and his favorite moments from the 2021-2022 season, download the episode from the iHeartRadio App or by below.

Q: We’re officially in 2022-2023 mode, does the offseason ever seem busier than the midseason routine?

A: That’s how it goes. As soon as the season ends, there’s a breakdown of where we’re at, what we saw, and where we need to go moving forward. I think that instantly starts and I think it’s good. It’s healthy because right away all the information and all the ideas are fresh, and you have to make sure management gets that information so they’re ready to move forward into their summer which is a lot of work all the time. The summer for them is the draft, free agency, trades, all those things start to happen in the summer for them. It’s a good time for kind of a brain dump to get everybody on the same page, take on some summer projects, and then get to work on those.

Q: We played 68 games this season, next year we go to 72. We think that would have been fine with this group, they wanted to keep playing.

Q: This was your first year back in Tucson, what did you expect out of this season coming in and what surprised you?

A: It wasn’t a full COVID season, but for a big chunk of the season we were dealing with COVID protocol. We got back the taxi squads and guys were going up and down. It was kind of like a modified American Hockey League season and everybody in the league saw a lot of the same challenges like guys going up and down. There were a lot of guys across the entire league getting their first NHL games, but we had a few more than most. There was that whole evolution and as we got in the back half of the season, all that seemed to calm down and it felt like the old American Hockey League again.

Q: Looking at our group in October now, with NHL debuts and players going back and forth since, it feels like with everything that we saw a lot of guys got ahead of a reasonable schedule in their progress.

A: I think if you look at all the guys there were different scenarios and situations that those guys went into. Dysin Mayo was obviously a really exciting one for our staff because Dysin gave so much to the Tucson organization in his time down here. He’s also just an unbelievable person to work with, he was our Captain to start the season out of that respect. For him to go up and achieve his dream of playing in the NHL and then to get a contract was really exciting, and he’s earned it. He’s worked incredibly hard for that situation and we’re really proud of him. If you look at the number of injuries that the Coyotes had this year, that’s what created the opportunity for these guys to go up and play. In terms of the schedule for guys, you don’t always dictate the schedule, it’s the situation that dictates the schedule. For us, what we’re trying to do is just have as many details and fundamentals in their games so when the opportunity presents itself, those guys have a good chance of going up and performing well.

Q: With all the call-ups, transition, and different depth situations, what was the secret behind staying in so many close games?

A: Sometimes when you get new players that are in the American Hockey League for the first time, those guys have a lot to prove. It’s a lot like our guys in the NHL, they want to prove that they’re there to stay and they want to stay. These other players whether they be ECHL players that are called up or college free agents at the end of their season, those guys are trying to earn contracts and they did a good job competing. From a coaching standpoint, especially in the end when the college season ended, it was almost like September again in terms of the teaching that we were doing with these new players. They weren’t just coming in to practice they were fully integrated parts of our team in terms of five-on-five play, power-play, four-on-four, sometimes penalty-killing. Those guys did a little bit of everything for us which was amazing.

Q: With basically four renditions of this team between opening night, call-ups, after Christmas, the Taxi Squad, adding ECHL guys, then college guys, players going back and forth, our identity and our culture was one thing that never wavered.

A: I thought the guys did a really good job with playing hard and competing every night. They made sure the fundamentals we talked about were part of the game. I think you saw a lot of our fundamentals showing up night in and night out when you watched our team play. There were some good parts to the season and part of our role is making sure our guys are ready to go up and play in the NHL when they get that opportunity. We saw guys go up and not come back and a couple guys go up for a long time and then come back, so those are all good things. When you’re coaching in the American Hockey League, there’s a balance between individual success with how those guys do at the next level and team success. Obviously, we want a little more of that team success, but we want to maintain the individual growth that we had this year for a lot of guys.

Q: How rewarding is it for a coach to see all these guys develop and reach the NHL?

A: It’s huge. These are guys that have played in the minors for a long time and a lot of times when you get into that age range for a guy like Dysin Mayo, that’s where the window starts to close. But no matter what happens, he keeps working and the coaching staff keeps working with him and believes in him because of all the little things that he did on and off the ice. For him to go up and secure that three-year deal was impressive. Another guy like that was Mike Carcone. He played for a few different organizations and spent a lot of time in the American Hockey League. He’s another guy where you hit that age range and your philosophy changes a little bit and your approach to life changes a little bit. An opportunity presented itself and he was able to go up and not come back, and we’ll see where that leads to next season.

Q: Ivan gave a great quote after our last game, saying when things are going smooth, you’re not learning, you don’t need to adjust. Growth and development happens through challenges and adversity.

A: Adversity shows players’ and coaches’ true character. You get an insight into what’s really motivating those people and how they’re handling the situation. We had a resilient group in that locker room in Tucson this season. They just kept going right to the very end regardless of where the standings were or who was getting called up or what the roster looked like that that night. That’s something for us that was a lesson learned and we can maintain that. Hopefully we’ll find a season with better numbers, more wins, and get into a playoff series and those are the attributes that are going to help the players and coaches in a winning situation.

Q: What’s the message to a college guy, an ECHL player, or someone new to the AHL stepping into our locker room for the first time?

A: We give them a little information, not too much, we need to have a basic structure. They get basically an intro into what we’re trying to do, we talk about our fundamentals that we’re trying to get accomplished in the game. For them, it’s really like “hey get in there and let’s go to work and get the first one under your belt” and then we’ll start growing from there. There’s just a lot of individual teaching that goes on as they’re getting started.

Q: What are the first steps to preparing for next season?

A: The first steps are reflecting. When the season ends it’s extremely raw whether it ends with the regular season or the playoffs, there’s a lot of emotion that goes with it. For a lot of the guys in Tucson, we don’t spend a whole lot of time there in the summer, so you get back home, settle in, and reflect a little bit. Those guys start training right away and the coaches start building for next season. They start looking at rosters, where our contracts are at, obviously management is handling most of that, but we’re in conversations with management. We look at who we have coming back, and it just grows. The intensity of that focus grows throughout the summer and the players start to increase the intensity of their workouts. They start to skate more, coaches start to get ready, and you start to see a roster form as the summer goes on. Then we have development camp, rookie camp, training camp, and the whole cycle starts again.

1-On-1 With Roadrunners Forward Tyson Empey
Scroll to top