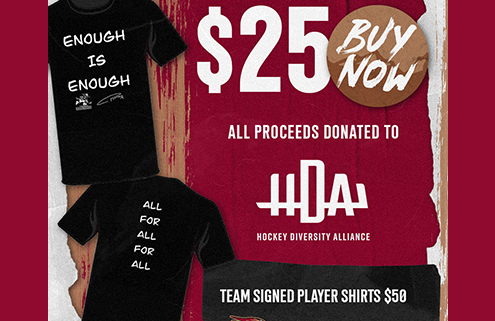 Tucson, Arizona – Tucson Roadrunners Forward Boko Imama and the Roadrunners team and organization have collaborated to create a t-shirt advocating an end to racism and inclusion for everyone that will be available starting at Saturday’s 7 p.m. game at the Roadrunners Give Back table.

“The Roadrunners are proud to be support and take pride in all members of our community and advocate that hockey is for EVERYONE and we mean EVERYONE,” said Roadrunners President Bob Hoffman.

The shirt reads “Enough is Enough” on the front and “All for All for All” on the back.

The mission of the Hockey Diversity Alliance is to eradicate racism and intolerance in hockey and they are committed to inspiring a new and diverse generation of players and fans. For more information, visit their website at HockeyDiversityAlliance.org.