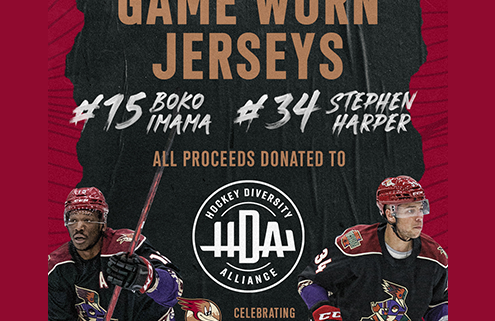 Tucson, Arizona – Tucson Roadrunners Forwards Boko Imama and Stephen Harper are auctioning off their game worn Kachina jerseys with all proceeds to benefit the Hockey Diversity Alliance as the organization and its players celebrate Black History Month.

Bidding for the jerseys is underway at TucsonRoadrunners.com/February and the event will run through Monday, February 28 at 9 p.m. The jerseys are from this season and will be available to the winners on March 1.

The mission of the Hockey Diversity Alliance is to eradicate racism and intolerance in hockey and they are committed to inspiring a new and diverse generation of players and fans. For more information, visit their website at HockeyDiversityAlliance.org