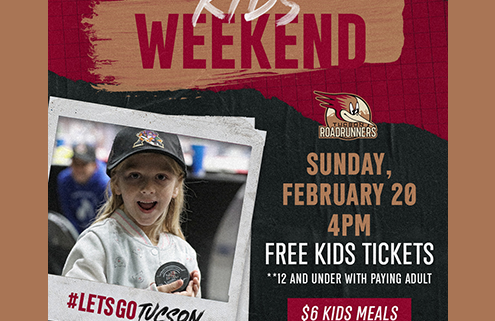 Tucson, Arizona – The Tucson Roadrunners, owned and operated by the Arizona Coyotes, will host Kids Weekend to open their four-game home stand Saturday at 7 p.m. and Sunday at 4 p.m. when they host the Henderson Silver Knights.

-Family Packs include four tickets and $20 in Concessions Vouchers at TucsonRoadrunners.com/Family.

-$20: Fan Zone Tickets and T-Shirt for Students at TucsonRoadrunners.com/Deal

Offer Valid at Arena Box Office on Sunday Only.

–$6 Kids Meals will be available at Concessions Stands.

-Half Priced Tickets starting at $10 for Active Military, Veterans and Students at Arena Box Office.

Roadrunners Give Back, a branch of the Arizona Coyotes Foundation, will be selling team a limited supply signed Youth Jerseys for $50.

The home stand continues Saturday, February 26 and Sunday, February 27 for Roadrunners Fight Cancer Weekend. The team will be wearing Hot Pink Roadrunners jerseys in the fight against cancer with the sweaters being auctioned off live right off of the player’s backs after the game on Sunday for Banner Health University of Arizona Cancer Center.