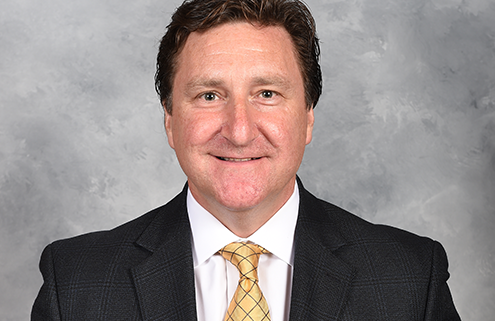 “We are very pleased to name John as our new assistant general manager,” said Armstrong. “John is extremely knowledgeable about the game and with 20-plus years in the NHL, brings a tremendous amount of experience to our hockey operations department. We are thrilled to have him join our team and I am looking forward to working with him.”

“I’m very excited to join the Coyotes organization,” said Ferguson. “I’m grateful to Bill, Xavier Gutierrez and Mr. Meruelo for providing me with this opportunity. I’m excited about the Coyotes vision and plan for the future and look forward to helping Bill build a long-term winning team in the Valley.”

Ferguson joins the Coyotes from the Boston Bruins, where for the past seven years, he served as the organization’s Executive Director of Player Personnel and General Manager of the Providence Bruins (AHL). Ferguson joined the Bruins’ hockey operations staff on June 27, 2014 and was named as General Manager for Providence on Sept. 15, 2016. While with the Bruins, Ferguson scouted at the professional and amateur levels with an eye to adding both prospects and roster players to the team. He also served as an advisor in evaluating potential trades, signings, and other transactions.

The Montreal native brings a wealth of experience to the Coyotes’ front office, having run every facet of a hockey operations department during his career. Ferguson previously served for six seasons as the Director of Pro Scouting for the San Jose Sharks (2008-14), four-plus seasons as Vice President and General Manager of the Toronto Maple Leafs (2003-08), and six seasons as Assistant General Manager and Director of Hockey Operations with the St. Louis Blues (1997-2003). He has also been both an amateur and professional scout for the Ottawa Senators.

In 2007, Ferguson served as a member of Team Canada’s management group at the 2007 IIHF World Championship in Russia. He collaborated with Steve Yzerman in selecting Canada’s unbeaten gold medal roster which was the youngest team to ever win a World Championship.

Ferguson played college hockey at Providence College where he served as an assistant captain and was an Academic All-American. He was drafted by the Montreal Canadiens as a 12th round selection in the 1985 NHL Entry Draft and played four seasons at the AHL level with Sherbrooke, Peoria, Fredericton, and New Haven. In 1995, he earned his law degree from Suffolk University Law School and was a player agent for one season in 1996-97.