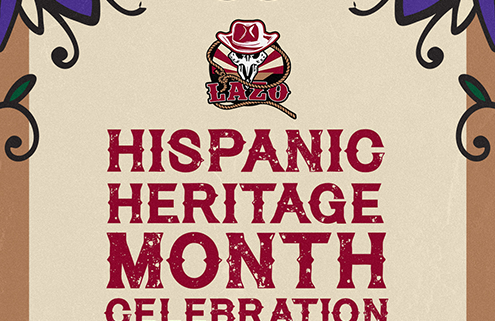 Tucson, Arizona – The Tucson Roadrunners, owned and operated by the Arizona Coyotes, will be celebrating Hispanic Heritage Month from September 15 through home games on October 29-30; which will be the team’s first El Lazo de Tucson weekend in conjunction with Dia de los Muertos.

Each week during Hispanic Heritage Month, the Roadrunners will be highlighting a Southern Arizona non-profit organization that positively impacts our community by hosting a Golden Ticket Raffle for a Roadrunners game made El Lazo jersey. Proceeds from each week’s event will then be donated to the featured organization. The events will be live at TucsonRoadrunners.com/HHM and fans can check back each week for the next jersey.

“Hispanic Heritage Month is a favorite of ours,” said Roadrunners President Bob Hoffman. “We are looking forward to sharing more about how our community partners help make Southern Arizona such a special place and also raising money to assist in their causes in our Golden Ticket Raffles. It will be a great celebration leading to the start of hockey season.”

As part of the team’s Fan Fest on Sunday, October 3 at Crossroads at Silver Bell District Park; admission is free, but fans are asked to bring non-perishable food items for the Community Food Bank of Southern Arizona. The event will run from 9 a.m. – 12 p.m. More information can be found HERE.

The team is also excited to appear at Tucson’s Mexican Baseball Fiesta from September 30-October 3 with Mascot Dusty.

During Hispanic Heritage Month, Roadrunners Staff and Dusty will be on the lookout in Southern Arizona for Random Acts of Kindness and awarding tickets to upcoming Roadrunners games for the 2021-2022 season.

The Roadrunners open the regular season Friday, October 15 in Stockton with the Home Opening Weekend Saturday, October 23 at 7 p.m. and Sunday, October 24 at 4 p.m. against Texas. The team will host a preseason game on Wednesday, October 6 against Henderson at 6:30 p.m. from Tucson Arena.

The Roadrunnners ‘El Lazo’ identity is a continuing effort to embrace all that is Southern Arizona and the history and culture of the community. The El Lazo mark features the skull of a Roadrunner in celebration of Dia de Los Muertos and the All Souls Procession (a public ceremony began in Tucson in 1990). El Lazo, Spanish for ‘lariat’ or ‘lasso’, is  taken from the City of Tucson’s city seal that ties together the modern city and the historic area that is now Tucson. The Tucson Rodeo and Parade is held every February and celebrates the ranching history of the area. The skull in the logo is wearing a cowboy hat to reflect this historic tradition in Southern Arizona. The team unveiled their El Lazo identity in 2020 and skated in their El Lazo jerseys for three games during the 2020-2021 season.  2021-2022 will mark the team’s second season featuring games in their El Lazo identities.

RRTV In The Community: TeamSmile Special
Scroll to top