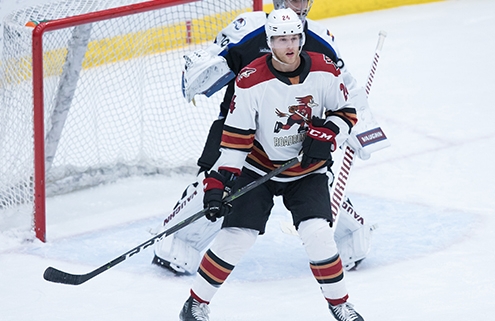 GLENDALE, ARIZONA – Arizona Coyotes General Manager Bill Armstrong announced today that the Coyotes have signed forward Hudson Fasching to a one-year two-way contract. As per club policy, terms of the contract were not disclosed.

The 26-year-old Fasching skated in five games with the Coyotes in 2020-21. The 6-foot-3, 204-pound forward also registered one assist in two games with the Tucson Roadrunners (AHL).

The Milwaukee, WI native has totaled 1-2-3 with eight penalty minutes (PIM) in 27 career NHL games with the Buffalo Sabres and Coyotes. He has also collected 55-56-111 with 79 PIM in 229 career AHL contests.

Fasching was originally drafted by the Los Angeles Kings in the fourth round (118th overall) in the 2013 Entry Draft.

-Roadrunners are 22-4-3-0 when he’s scored while in Tucson uniform.