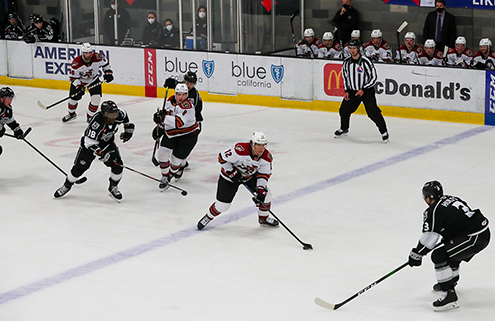 Imama was second on Ontario in scoring against Tucson this past season with four goals and three assists for seven points in seven games. He was tied for second on the team with a plus-six.

The 6-foot-1, 221-pound native of Montreal, QC has collected 16-19-35 and 320 PIM in 153 career AHL games with Ontario while also serving as an Alternate Captain. He was originally drafted by the Tampa Bay Lightning in the sixth round (180th overall) in the 2015 NHL Entry Draft.

The 23-year-old Hults recorded 1-4-5 and five PIM in 19 games with Ontario this season.

The 6-foot, 189-pound native of Madison, WI played collegiately at Penn State where he ranks first on the program’s all-time defensemen points list with 78. Hults totaled 17-61-78 in 111 career games with the Nittany Lions. His 17 career goals rank second all-time by a Penn State defenseman.

Hults was originally drafted by the Kings in the fifth round (134th overall) in the 2017 NHL Entry Draft.