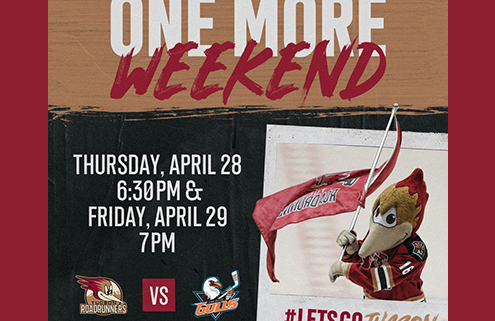 Tucson, Arizona – The Tucson Roadrunners, owned and operated by the Arizona Coyotes, have added an additional weekend to the home schedule to wrap up the 2021-2022 regular season.

The two games are rescheduled dates from the December 31 and January 2 postponed games. Fans with tickets to the postponed games can use their tickets for the rescheduled contests and can contact the Roadrunners Offices with any questions at (866) 774-6253.

In addition, the Roadrunners have added two road games to the schedule as rescheduled contests from games in Abbotsford that were originally slated for December 22 and 23.

And finally, the team’s home game against Ontario on Sunday, February 27 will now face-off at 3 p.m.

The Roadrunners return to Tucson Arena to host the Bakersfield Condors coming up this Wednesday, January 26 at 6:30 p.m. The series will also feature an El Lazo de Tucson night on Friday, January 28, followed by Star Wars night on Saturday, January 29. For more information on the series and to purchase tickets, click HERE.