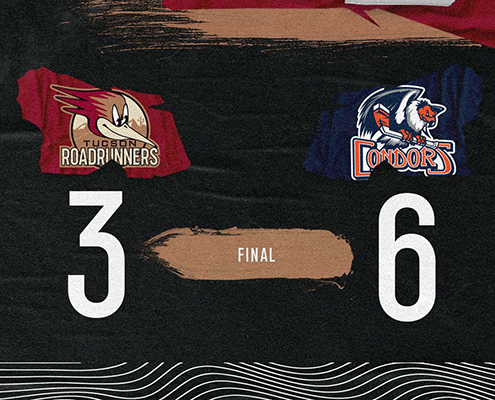 2-0 SECOND PERIOD LEAD GOES BY BOARD IN BAKERSFIELD

Bakersfield, California – The Tucson Roadrunners faced the Bakersfield Condors for the first time since March 1, 2020 Wednesday night at the Mechanics Bank Arena. The Roadrunners jumped out to a 2-0 lead but a pair of power-play goals by the Condors tied up the game late in the second period. Bakersfield continued to rally to hand the Roadrunners a 6-3 loss in game four of the six-game road trip. Goaltender Ivan Prosvetov returned to the crease for the Roadrunners after a start with the Arizona Coyotes on Saturday, January 14, and stopped 22 shots on goal.

The first score of the night wasn’t until there were less than five minutes remaining in the opening period, when some excellent puck movement and team play by the Roadrunners led to a Travis Barron goal, his fourth of the year. Tucson carried their 1-0 lead into the second period and extended it to 2-0 with 8:44 gone by in the middle frame when Cole Hults buried his second score of the season. Assisting on the play were forwards Stephen Harper and Max Coatta, Harper’s first point as a Roadrunner and Coatta’s first career AHL assist. The Condors went on the first power-play of the night just past the midway point of the period and used it to score their first goal of the contest, pulling to within one. Eight minutes later, Bakersfield evened up the score with their second goal of the night, once again on the man advantage. The Roadrunners and Condors entered the final 20 minutes of regulation deadlocked at two goals apiece, but a score by Bakersfield 5:08 into the frame gave the Edmonton Oilers AHL affiliate their first lead of the night. The Condors didn’t look back, as Adam Crackell tallied a pair of goals 5:08 apart in the middle of the third period to give his team a 5-2 lead. Tucson pulled to within two goals with just over six minutes left on the clock when Mike Carcone netted his eighth goal of the season on the Roadrunners lone power-play of the game. Goaltender Ivan Prosvetov was sent off in favor of an extra attacker for the Roadrunners, but an Adam Cracknell empty-net strike secured a hat trick for the 36-year-old and a 6-3 win for the Condors on their home ice.

The Roadrunners wrap up their road trip this weekend when they’ll take on the Ontario Reign for a pair of games Saturday and Sunday at the Toyota Arena. Saturday’s game is scheduled for 7:00 p.m. MST, with coverage beginning at 6:45 on Fox Sports 1450AM with Roadrunners Warm-Up hosted by Jimmy Peebles. Then, “Voice of the Roadrunners” Adrian Denny will have all the action live from Ontario, California.

“We were just grinding, trying to keep it simple, get pucks in and out. We talked about having a good forecheck and on that goal I think we did. It was a hard-earned goal and a good finish by [Cole Hults].”

Roadrunners forward Max Coatta on recording his first career AHL point with an assist on a Cole Hults goal in Tucson’s game against the Bakersfield Condors Wednesday night.

QUALITY OVER QUANTITY – Although there were only three total penalties between the Roadrunners and Condors in Wednesday night’s matchup, each trip to the man advantage produced a power-play goal. Bakersfield was two-for-two with both special-teams scores coming in the second period, while Tucson cashed in on their lone power-play of the night with Mike Carcone’s second goal in as many games, with both coming while on the man advantage.

Watch Tucson Roadrunners forward Travis Barron get the scoring started in Wednesday night’s meeting with the Bakersfield Condors on the road at the Mechanics Bank Arena. The score marked his fourth of the year and second point of the road trip. The 23-year-old has already surpassed his previous career-high for points in a season with four goals and four assists, also marking career-highs.

Tucson Roadrunners forward Cameron Hebig handles the puck in Tucson’s matchup with the Bakersfield Condors Wednesday night at the Mechanics Bank Arena. Hebig appeared in 95 games over two seasons with the Edmonton Oilers AHL affiliate from 2018 to 2020 before joining the Roadrunners on a PTO in 2021, and Wednesday’s game marked the first time Hebig has faced his former team.