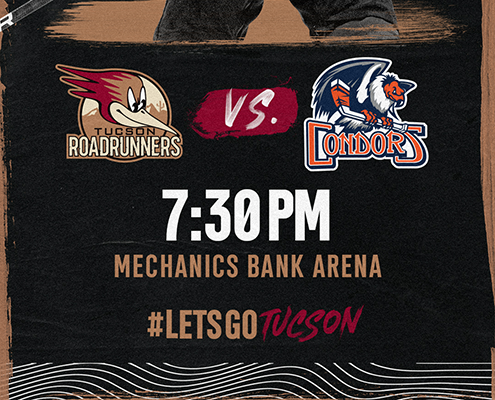 The Tucson Roadrunners will continue their six-game road trip down to Southern California, beginning with a midweek matchup against the Bakersfield Condors Wednesday night. Wednesday’s contest marks the first meeting this season between the Roadrunners and Condors on the season. Tucson and Bakersfield will meet again for a three-game set at the end of the month back at the Tucson Arena beginning on January 26. Tickets for the series to conclude the month of January can be found HERE.

Three Things
1) The Roadrunners will be facing the Bakersfield Condors for the first time since March 1, 2020. Tucson won the meeting by a score of 3-2 in Bakersfield, with current Arizona Coyotes defenseman Kyle Capobianco netting the eventual game-winner on the power-play in the second period. The Roadrunners finished the 2019-2020 campaign with a 2-1 record against the Condors at the Mechanics Bank Arena, with the other victory coming on November 27, 2019, by a score of 8-3. The Condors were the only team in the AHL’s Pacific Division last season that the Roadrunners did not face over the course of the 36-game slate.

2) Taking on his former team for the first time Wednesday night will be Roadrunners forward Cameron Hebig. The 24-year-old has scored a goal in two of Tucson’s three contests so far on their current road trip, including his first power-play strike of the season. Hebig made the Roadrunners roster on a PTO last year after spending the previous two campaigns with the Bakersfield Condors and has elevated his game in his second season in the desert. Hebig is four goals away from matching a season-high in goals, which he achieved in his rookie campaign with the Condors in 2018-2019.

3) Returning to the Roadrunners roster earlier this week from the Arizona Coyotes were defensemen Victor Soderstrom and Vlad Kolyachonok, along with goalie Ivan Prosvetov. Soderstrom and Kolyachonok played on the same defensive pairing for four games in six days with the Coyotes as the team went 2-1-1, including a pair of wins against the Toronto Maple Leafs and Montreal Canadiens. Meanwhile, Prosvetov makes his way back to the Roadrunners after a 44-save effort against the Colorado Avalanche on Friday, January 14.

What’s The Word?
Roadrunners forward Cameron Hebig on the first half of the six-game road trip across California, that saw Hebig score in two of the three outings for the Roadrunners:

“It’s nice to contribute and do anything I can to help. We just have to keep working and plugging away and try to win some games. Our focus is on getting better each day and we have a big push here [in California] and we’re looking forward to that.”

Number to Know
44 – The number of saves made by goaltender Ivan Prosvetov in his most recent start for the Arizona Coyotes on Friday, January 14. The outing marked the third NHL start of Prosvetov’s career, and the 22-year-old forced a shootout against the division-leading Colorado Avalanche, which featured a scoreless second period with 14 saves made by Prosvetov.

We’re Doing It Live
Tonight’s game will be broadcast on AHLtv, as well as on the radio on Fox Sports 1450AM, or on the iHeartRadio app. Coverage begins at 7:15 p.m. MST with Roadrunners Warm-Up, as Jimmy Peebles gets you ready for the game before “Voice of the Roadrunners” Adrian Denny has the call at 7:30 p.m. live from Mechanics Bank Arena.