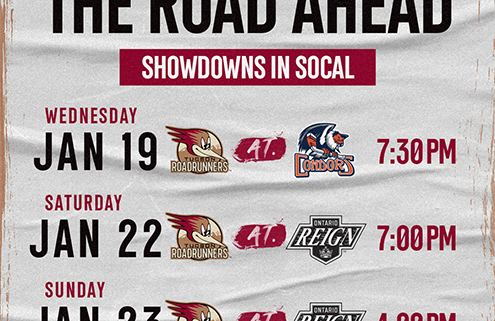 Continuing On In California

The Roadrunners will play out the second half of their six-game California road trip when they take on the Bakersfield Condors Wednesday and the Ontario Reign for a pair of games Saturday and Sunday. Wednesday’s matchup with the Condors marks the first meeting between these teams since March 2020, as Bakersfield was the only team in the AHL’s Pacific Division last year that the Roadrunners did not face. Tucson will continue on for the fourth and fifth contests with the Ontario Reign this season Saturday night and Sunday afternoon. The Roadrunners are 1-0 at the Toyota Arena this year, with a 4-3 overtime comeback victory on December 18.

Tucson traveled to the SAP Center in San Jose for the first time since February 2020 Wednesday night to kick off their California road trip. The Roadrunners trailed for most of the contest but scored a pair of goals 1:08 apart in the third period to take the lead with just 5:52 remaining in regulation. Tucson goaltender Josef Korenar faced his former team for the first time after spending the last three seasons as a member of the San Jose Sharks organization and stopped 20 shots on goal in the win. The Roadrunners have now come from behind in six of their last 12 victories.

After the first meeting between the Roadrunners and Bakersfield Condors on the season coming up this Wednesday, the teams will meet three times at the Tucson Arena over the Roadrunners next five contests. The series will feature an El Lazo de Tucson night on Friday, January 28, followed by Star Wars night on Saturday, January 29. For more information on the series and to purchase tickets, click HERE.

Not Too Late For Ten55

Ten55 Brewing Company is still offering a special deal for the Roadrunners three remaining January home games. Fans can purchase two game tickets and receive a $25 gift card to Ten55, a $125 value for just $49. More information on this special offer can be found HERE.

Tucson Roadrunners rookie forward Matias Maccelli has been at the center of the offense since returning to the lineup on January 8. In his last five outings, the 21-year-old has tallied six points including a three-point performance on January 12 in San Jose. Maccelli has not only excelled in scoring goals this season, but he has also set up his teammates for key scoring chances. The Turku, Finland native leads the Roadrunners in assists with 18, tied for second-most among AHL rookies.

Tucson forward Cameron Hebig has embraced a larger role in the Roadrunners offense this season after joining the team on a tryout last season. The 24-year-old has scored in two of his last three games on the current road trip to reach 10 points on the season. Hebig has played alongside other key pieces of the Tucson roster, as the team leader in points, Matias Maccelli, has assisted on five of seven of Hebig’s goals this season. Hebig’s seven strikes is his second-most in a season over his career less than halfway through the 2021-2022 season.

After a four-game set at home that saw the Roadrunners special-teams units put up near-perfect performances, the story of the six-game road trip so far has been their even-strength situations. Tucson has only allowed five goals while skating five-on-five over the last three contests, keeping them in close games to the final whistle.

Tucson has had four different skaters make their season debuts over the last five games. It began at home against the Colorado Eagles January 8, when forward Cedric Lacroix made his first appearance for the Roadrunners. The 27-year-old got in a fight in the first period to introduce himself to the Roadrunners fans in attendance. Then, Friday’s game with the San Jose Barracuda marked defenseman Ryan DaSilva’s debut with the team after being signed to a PTO out of Tulsa (ECHL). The next night saw 2021 ECHL finals MVP Stephen Harper make his first appearance for Tucson after being acquired from the Chicago Wolves, as well as the return of Doyle Somerby to the Tucson roster. Somerby appeared in 24 games with the Roadrunners last season and was recently re-acquired from the Iowa Wild.

Some of the newest Roadrunners have already shared the ice together at the professional level. ECHL Finals MVP Stephen Harper and the Fort Wayne Komets took down the South Carolina Stingrays with current teammate Doyle Somerby in the opposite dressing room. Harper and fellow forward Cedric Lacroix also briefly shared a locker room as members of the Chicago Wolves earlier this season, skating in two games together.

The Tucson Roadrunners Happy Hour with Adrian Denny and Brett Fera goes live every Tuesday from 5 p.m. to 6 p.m. on Fox Sports 1450 AM and the iHeartRadio app. This week will feature a special guest, Roadrunners forward Hudson Fasching. In addition to Roadrunners Happy Hour, the Tucson Roadrunners Insider Podcast is available every Sunday, where Adrian Denny and Jimmy Peebles talk most things Tucson Roadrunners. This week the guys caught up with the team for some impromptu hotel lobby interviews and heard postgame comments from Ivan Prosvetov’s 44 save effort against the Colorado Avalanche, and Cameron Hebig after scoring his seventh goal of the year Saturday in Stockton. The weekly podcast can be found on the iHeartRadio app.